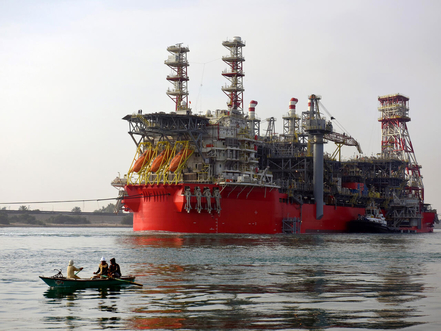 Israel is preparing to activate an offshore gas field partly disputed by Lebanon, aiming to boost energy exports to Europe but risking further tensions with its northern neighbor.

Israel and Lebanon, still technically at war, have engaged in on-off U.S. mediated talks since 2020 to delineate their Mediterranean border, which could allow both parties to boost offshore natural gas exploration.

But the Karish gas field has emerged as a potential pitfall.

Lebanon has claimed that part of the field falls within its own waters.

The powerful Lebanese Iran-backed movement Hezbollah launched unarmed drones towards Karish in July, after Energean brought a production vessel into the field. It has threatened attacks if Israel proceeds with extraction.

Israeli officials have consistently said that Hezbollah threats over Karish would not deter production, insisting that control over the field was not open to discussion.

"Israel believes that it is both possible and necessary to reach an agreement on a maritime border between Lebanon and Israel, in a manner that will serve the interests of the citizens of both countries," Israeli Prime Minister Yair Lapid said in a statement on Monday.

For Israel, ensuring production from Karish is crucial to achieving its goal of increasing energy exports to Europe, which is trying to fill supply gaps caused by declining Russian sales due to the war in Ukraine.

"We are going to be part of the effort to replace Russian gas in Europe," Lapid said, standing alongside German Chancellor Olaf Scholz in Berlin last week.

Israel was aiming to provide "10 percent" of what Moscow was delivering to Europe prior to Russia's invasion of Ukraine in February, Lapid said.

Israel's options for boosting gas exports to Europe are complex and fraught with challenges.

But experts agree the best short-term option is ramping up sales to Egypt, which could liquefy Israeli gas before shipping it Europe.

Israel and Egypt signed a deal to June to collaborate on that effort.

But if Israel wants to send more gas from its Leviathan and Tamar fields to Egypt while meeting its domestic energy needs, it needs "to have stable production from Karish," Israeli gas industry specialist Gina Cohen told AFP.

She said Israeli plans to increase exports to Europe are also contingent on expanding capacity of the existing pipeline to Egypt.

Despite "Lapid's talking," Israel is "not there yet," she said.

Israel's longer term gas export targets could be achieved by building a pipeline to Turkey, a scenario with improved prospects amid warming ties between Ankara and Israel.

But officials estimate that could take up to three years at a cost of $1.5 billion.

Another option is the EastMed project, a proposal for a seafloor pipeline linking Israel with Cyprus and Greece, but there are also concerns about the cost and viability of that project.

Lebanon amended its position in June, telling U.S. envoy Amos Hochstein that it was prepared to back off demands for territory where Israel planned to imminently extract gas.

But Hezbollah's threats over Karish have persisted and former Israeli general Amir Avivi warned that the risk of hostilities is possible, even if both governments want to see increased, stable gas production.

"Hezbollah is basically using the issue of Karish and this maritime dispute to show that they are the one caring about Lebanon's interest," he said.

The Lebanese army cannot and should not let the Zionist terrorists pump our gas , period.

Unfortunately the Lebanese Army can't control what is going on along its land border, so you expect it to be able to do something along a maritime border?