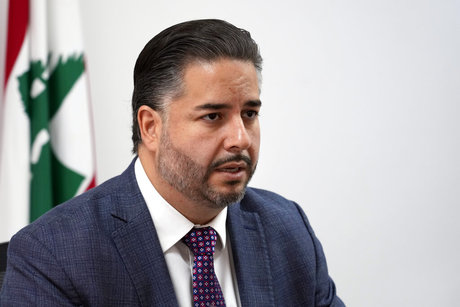 Crisis-hit Lebanon hopes to adopt key reforms demanded by the International Monetary Fund for a long-delayed but urgently needed bailout before the end of next month if there is "political will," Lebanon's caretaker economy minister said Tuesday.

Amin Salam spoke to The Associated Press after meeting with an IMF delegation that has been visiting Lebanese officials since Monday. The reforms would include restructuring the country's banking system and banking secrecy laws.

The small nation has been in the grips of a three-year severe economic crisis that has left three quarters of its population in poverty after the Lebanese pound lost more than 90% of its value.

Talks between Lebanon's government and the IMF began in May 2020 and reached a staff-level agreement earlier this year in April.

The Lebanese government has implemented few of the IMF's demands from the agreement, which lists five "key pillars" that should be implemented, before finalizing a bailout program. These include restructuring Lebanon's ailing financial sector, implementing fiscal reforms, the proposed restructuring of external public debt, and putting in place strong anti-corruption and anti-money laundering measures.

"The IMF is still very committed to help the Lebanese government move forward with the prior actions agenda," Salam said adding that since the staff level agreement was reached, Lebanon has held parliamentary elections while work is ongoing to form a new Cabinet and President Michel Aoun's six-year term ends on Oct. 31.

Since the economic meltdown began with nationwide protests in October 2019 against the ruling class that has run the country since the end of the 1975-90 civil war, little has been done to help Lebanon out of its worst economic crisis in its modern history. The political class, blamed for the decades of corruption and mismanagement that led to the crisis, has been resisting reforms demanded by the international community.

Lebanon's GDP has sharply dropped over the past few years from about $55 billion in 2018 to $20.5 billion in 2021. Tens of thousands have lost their jobs since 2019 as the crisis was made worse by coronavirus and a massive blast at Beirut's port in August 2020, that killed over 200, wounded thousands and caused damage worth billions of dollars. Daily life has become a struggle with rampant power cuts and some of the worst food inflation rates worldwide.

"We are hoping October will be the magical month," Salam said. He added that planned actions include a capital controls law, banking secrecy law, banking restructuring law and passing the 2022 state budget.

Salam said the four draft laws have been extensively studied and reviewed by Parliament and the government except for the banking restructuring laws that still are in the works.

"We believe that if those four prior actions are done soon, we get much, much closer to a final (bailout) deal this year," added Salam referring to a possible full bailout deal with the IMF, which would provide Lebanon some $4 billion and unlock billions more from international governments and institutions. Lebanon's central bank governor estimated that the country needs at least $12 billion in order to jumpstart its economy.

Salam also said that the talks with the IMF have been partially focused on the unification of the value of the Lebanese pound against the U.S. dollar, since at the present time Lebanon has at least five exchange rates for the pound.

Also on Tuesday, a warning came from the European Union's Ambassador to Lebanon Ralph Tarraf who tweeted after meeting Aoun that he urged the president "to do his utmost to support and actively contribute to the implementation of the crucial economic, monetary and fiscal reforms that Lebanon has committed to." Tarraf met Aoun along with other ambassadors including the envoys of Switzerland and Norway.

"The time to act is now," Tarraf tweeted after the meeting, calling on Lebanon to implement reforms demanded by the IMF.