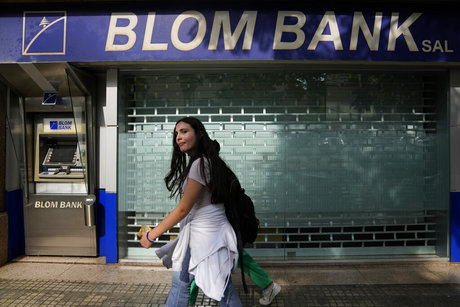 The Association of Banks in Lebanon is inclined to extend the closure of banks until Monday, al-Jadeed TV reported on Wednesday.

Al-Jadeed, however, communicated with Mawlawi, who denied advising the Association to extend the strike.

“Banks must shoulder their responsibilities towards employees and depositors and the Lebanese state has a duty to protect all citizens and public order and to preserve security in the country,” Mawlawi said.

“Bank also have a duty to protect their branches,” he added.

As a result, Lebanese banks sealed their doors on Monday as part of a three-day closure due to mounting security concerns.

A financial crash widely blamed on government corruption and mismanagement has caused the worst economic crisis in Lebanon's history.

The World Bank has branded the financial crisis one of the world's worst since the 19th century.

Making matters worse, Lebanese depositors have been locked out of their foreign currency savings by banking controls that have gradually tightened since 2019.

Unable to transfer or withdraw their dollar deposits, many have resorted to desperate bank heists to free their money.

If banks don’t open whilst people are expected to pay hospital bills, the banks should be held responsible if people die because of untreated wounds or diseases.

In my very humble opinion, the mob should have already dealt with the bank “owners” and their families a long time ago in Lebanon or abroad.