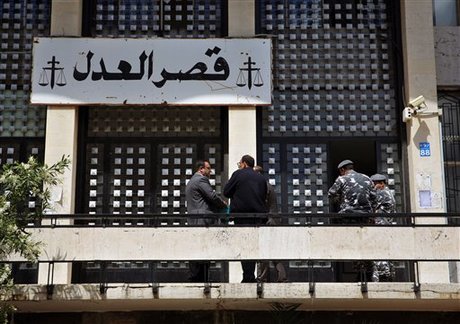 A Higher Judicial Council meeting to name an alternate judge in the Beirut port blast case witnessed heated disputes that reached the extent of the withdrawal of Council chief Judge Suheil Abboud from the session, a media report said on Wednesday.

The session was adjourned to September 27 in order to take a decision on six candidates proposed for the task, including Judge Samaranda Nassar, al-Liwaa newspaper reported, describing Tuesday’s meeting as the longest in the Council’s history.

Families of detainees in the case meanwhile rallied outside the Justice Palace, threatening to escalate their protests and vowing that they will no longer remain silent over the continued detention of their relatives.

They also stressed that they want an alternate judge in the case because “there is no other solution” to secure the release of their relatives, noting that “this solution was decided by the justice minister and the Higher Judicial Council, who are the two authorities eligible to settle this file.”

The controversial decision to name an alternate judge in the case, in violation of the law according to some experts, had infuriated the relatives of the victims of the blast, calling the move an attempt by the country's political class to prevent justice after one of the world's largest non-nuclear explosions.

The investigation into the blast, which killed 218 people, injured thousands and caused billions of dollars in damage has been blocked since December by Lebanon's political powers. That's after three former Cabinet ministers filed legal challenges against investigative Judge Tarek Bitar effectively suspending his investigations as well as his ability to look into requests for the release of the detainees.

Many blame the tragedy on the Lebanese government's longtime corruption, but the elite's decades-old lock on power has ensured they are untouchable. The Aug. 4, 2020 explosions occurred when hundreds of tons of highly explosive ammonium nitrate, a material used in fertilizers, detonated at the port.

It later emerged that the ammonium nitrate had been shipped to Lebanon in 2013 and stored improperly at a port warehouse ever since. Senior political and security officials knew of its presence but did nothing.

Bitar has been the subject of harsh criticism by Lebanon's powerful Hezbollah leader Sayyed Hassan Nasrallah. Nasrallah called Bitar's investigation a "big mistake" and said it was biased. He asked authorities to remove Bitar.

Bitar is the second judge to take the case. The first judge, Fadi Sawwan, was forced out after complaints of bias by two Cabinet ministers. If the same happens to Bitar, it could be the final blow to the investigation.

Bitar charged four former senior government officials with intentional killing and negligence that led to the deaths of dozens of people. He also charged several top security officials in the case.