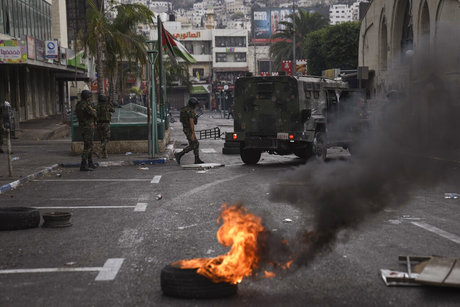 For now, the deal to end the clashes eases tensions in the area, which on Tuesday was gripped by some of the fiercest antagonism directed at the Palestinian Authority in years. But the truce failed to address the underlying and widespread opposition to Palestinian security coordination with Israel.

The clashes erupted after an arrest raid by Palestinian security against local militants. The two sides exchanged fire as angry residents pelted an armored jeep with objects and chased it away. One man was reported dead. The violence was reminiscent of the way Palestinians typically protest against Israeli troops.

The unrest in Nablus reflected the deep unpopularity of the Palestinian leadership, which is widely seen because of its security ties with Israel as entrenching Israel's 55-year military occupation of the West Bank and its nearly 3 million residents. It has also been beset by corruption and has repeatedly delayed elections.

A semblance of normal life returned on Wednesday to Nablus, known as the West Bank's business capital. Shoppers walked around the debris from the clashes as firefighters atop cranes smashed broken glass out of storefront windows bordering the city's main Martyrs Square. Palestinian security forces were deployed in armored vehicles in the city center.

A committee of Palestinian factions and other prominent figures said that under the truce, Palestinian security forces would cease to arrest suspects wanted by Israel in the city, unless they broke Palestinian law. Authorities would discuss the release of one of the men arrested in the recent raid. They would also release Palestinians detained in Tuesday's clashes, unless they damaged property or looted.

Israel has instead intensified its own activity in the area, sending troops on nightly arrest incursions into villages, cities and towns, rounding up hundreds of Palestinians and killing some 90 during that time. Israel says the vast majority of those killed were militants, while others have been local youths killed while throwing stones or firebombs at Israeli troops.

Some civilians have been killed in the violence, among them a veteran Al Jazeera journalist and a lawyer who inadvertently drove into a battle zone.

The northern West Bank, including the areas around Nablus and Jenin, a city that has long been a bastion of armed struggle against Israel, have been focal points in the raids. The Palestinian Authority has less of a foothold there and is viewed with deep suspicion because of its security ties to Israel.

That disenchantment, coupled with the soaring tensions driven up by the nightly Israeli raids, boiled over with the clashes on Tuesday.

Israel says the raids are aimed at dismantling militant networks that threaten its citizens, and that it makes every effort to avoid harming civilians. Palestinians say the incursions are meant to maintain Israel's military rule over territories they want for a future state — a dream that appears as remote as ever, with no serious peace negotiations held in over a decade.

Israel's occupation of the West Bank is now in its 55th year, with no signs of ending anytime soon. The Palestinians seek all of the West Bank, home to some 500,000 Israeli settlers, as the heartland of a future independent state.

In Tel Aviv, police said they found West Bank resident Musa Sarsour, 28, hanged in central Tel Aviv, off a major shopping district. Sarsour was suspected of killing an 84-year-old woman in a suburb south of Tel Aviv on Tuesday.

Security camera footage, which captured the attack, showed the woman being struck repeatedly from behind and falling to the ground.

Israeli Prime Minister Yair Lapid, who was at the United Nations General Assembly in New York, called the killing a "shocking attack by a despicable and cowardly terrorist."