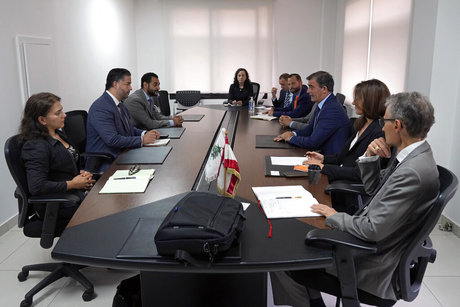 The International Monetary Fund has said the Lebanese government's slowness to implement desperately-needed reforms was exacerbating the country's economic meltdown, even as officials met to discuss an urgent and long-delayed bailout.

The IMF statement followed a three-day visit to Beirut of the fund's representatives to discuss with Lebanese officials the implementation of reforms drawn up under a staff-level agreement between the two sides in April.

"Despite the urgency for action to address Lebanon's deep economic and social crisis, progress in implementing the reforms agreed under the April SLA remains very slow," the IMF said.

The Lebanese government has implemented few of the IMF's demands from the agreement, which lists five "key pillars" that should be implemented, before finalizing a bailout program. These include restructuring Lebanon's ailing financial sector, implementing fiscal reforms, the restructuring of external public debt, and putting in place strong anti-corruption and anti-money laundering measures.

The Lebanese economy has been in a free fall since late 2019 in an economic meltdown described by the World Bank as one of the worst the world has witnessed since the 1850s. The crisis is rooted in decades of corruption and mismanagement by the political class that has been running the small nation since the end of the 1975-90 civil war.

The IMF said Lebanon's GDP has contracted by over 40% since 2018, inflation remains in the triple digits, foreign reserves are dwindling, and the parallel exchange rate hit new lows this week reaching over 38,000 Lebanese pounds to the dollar.

"Amidst collapsing revenues and drastically suppressed spending, public sector institutions are failing, and basic services to the population have been drastically cut," Ramirez Rigo said. "Unemployment and poverty are at historically high rates."

The visit came a week after angry depositors stormed at least seven bank branches to get their trapped savings after local lenders imposed informal capital controls since the economic crisis began.

The IMF statement said the large losses in the banking sector need "to be recognized and addressed upfront, while respecting the hierarchy of claims. Small depositors must be fully protected."

On Wednesday, the Association of Banks in Lebanon, said bank branches will not be opened as planned on Thursday but will remain closed "because of the dangers that employees and customers could be subjected to." It said the banks will remain closed until they get assurances from the state and security agencies.

Earlier Wednesday, judicial authorities ordered the release on bail of two men who took part in a bank heist last week. The two men were ordered banned from leaving the country for six months.

On Tuesday, Lebanon's caretaker Economic Minister Amin Salam said Lebanon hopes to adopt key reforms demanded by the IMF for a long-delayed but urgently needed bailout before the end of October if there is "political will".

Salam added that the adoption of the reforms would provide Lebanon some $4 billion and unlock billions more from international governments and institutions. Lebanon's central bank governor estimated that the country needs at least $12 billion in order to jumpstart its economy.

IMF or any one else you honestly think the Lebanese gov't, that's run by crooks, mafia bosses, militia heads is going to do any reform? Save yourselves and your money. This country (if it is anymore) is in a free fall collapse.

The only salvation for it is to ut under a caretaker. I have been advocating (not that i want to), that France as the former colonial ruler, make it an overseas territory subject to french rule and appoint a governor to administer it. Nothing else will work. The country is obsess with sectarianism.