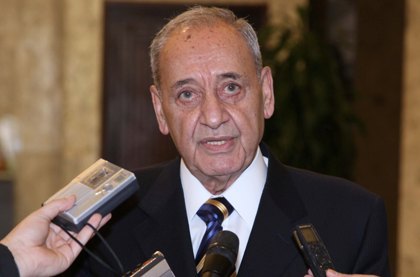 Parliament Speaker Nabih Berri on Friday met with the ambassadors of the EU and its member states resident in Beirut.

During the meeting, Berri thoroughly explained “the roadmap to rescue the situation in Lebanon, topped by the agreement with the International Monetary Fund and finalizing the reformist laws such as the state budget, the capital control law, the banking secrecy law and the economic recovery plan that have recently reached parliament.”

The Speaker also underscored “the importance of preserving depositors’ rights, seeing as it is an essential motive to regain confidence in the financial and baking fields and for the recovery of the economic cycle in the country.”

“There is a tight timeframe to achieve what’s needed from us, which requires close cooperation between the parliament and government, in order to allow parliament to tackle the top constitutional juncture, which is the election of a new president,” Berri added.