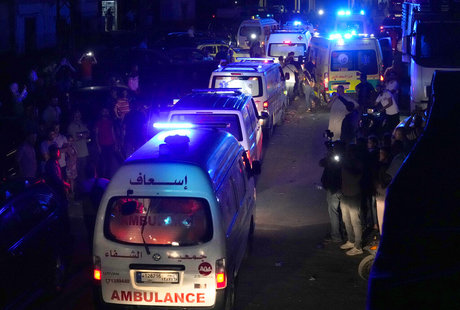 Eighty-six bodies have been recovered since a boat carrying migrants from Lebanon sunk off Syria's coast, Syrian state media said Saturday, in one of the deadliest recent such shipwrecks in the eastern Mediterranean.

Search efforts were continuing with several people still missing since the boat sank on Thursday.

"The number of people who died has risen to 86," the head of Syrian ports Samer Kbrasli said Saturday, up from an earlier toll of 73, the official news agency SANA reported.

At least 20 people rescued were recovering in hospitals in Syria, some in a serious condition, according to the United Nations.

Lebanon, a country which hosts more than a million refugees from Syria's civil war, has since 2019 been mired in a financial crisis branded by the World Bank as one of the worst in modern times.

It has become a launchpad for illegal migration, with its own citizens joining Syrian and Palestinian refugees clamoring to leave.

More than 450,000 Palestinians are registered in Lebanon with the U.N. agency for Palestinian refugees, UNRWA.

As many as 150 people were on board the small boat that sank off the Syrian port of Tartus, some 50 kilometers north of Tripoli in Lebanon, from where the migrants set sail.

Those on board were mostly Lebanese and Syrians and Palestinians, and included both children and the elderly, the U.N. said.

"No one gets on these death boats lightly," UNRWA chief Philippe Lazzarini said in a statement. "People are taking this perilous decision, risking their lives in search of dignity."

Lazzarini said more must be done "to offer a better future and address a sense of hopelessness in Lebanon and across the region, including among Palestine refugees."

Since 2020, Lebanon has seen a spike in the number of migrants using its shores to attempt the perilous crossing in jam-packed boats to reach Europe.

Most of the boats setting off from Lebanon head for European Union member Cyprus, an island about 175 kilometers to the west.