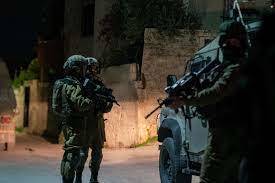 The army said that "hits were identified" after soldiers fired towards "armed suspects driving in a vehicle and a motorcycle" near Nablus in the northern West Bank, an area that has seen near daily violence in recent months.

A loose coalition of fighters called "The Lions Den" that has recently emerged in Nablus claimed Koni as one of their members.

Among the members of this group was teenager Ibrahim al-Nabulsi, who has become a folk hero on social media since his killing by Israeli forces in August. Pendants of al-Nabulsi are on sale in the markets of Nablus Old City.

Koni's death was the second in the Nablus area in the past two days.

On Saturday, a Palestinian driver was killed by Israeli troops after what the army called an "attempted ramming attack", but which Palestinians said was a traffic accident.

The army said soldiers and police opened fire on a vehicle after the driver "attempted to run them over" during a patrol outside Nablus.

The Palestinian foreign ministry described Muhammad Ali Hussein Awad, 36, as a "defenseless Palestinian" who was not "posing any danger."

"The Israeli police deliberately shot Awad, with the aim of killing him, after his vehicle collided with a police vehicle in a traffic accident," the ministry said.

Israel has occupied the West Bank since the Six Day War of 1967.

There have been persistent car-rammings and other attacks by Palestinians on Israeli military vehicles and checkpoints in the territory in recent years.

Israeli forces have faced criticism over their frequent use of lethal force in response to perceived threats.

Israel is on high alert ahead of the Jewish high holiday season which begins on Sunday evening with Rosh Hashana, the Jewish new year.

Since March, Israel has launched hundreds of raids in the northern West Bank, including Nablus and nearby Jenin, in pursuit of individuals it accuses of involvement in deadly attacks targeting Israelis.

The raids have sparked clashes that have killed dozens of Palestinians, including fighters.