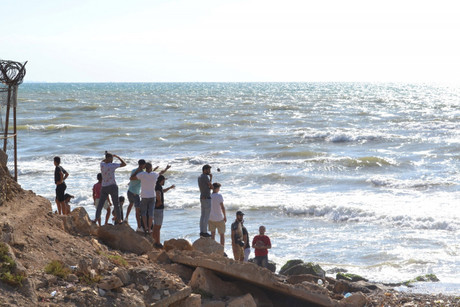 Syrian authorities have recovered 100 bodies from a Lebanese migrant boat that sank off Syria last week, Syrian state media reported about one of the deadliest recent shipwrecks in the eastern Mediterranean.

The first bodies were found last Thursday and only 20 people were rescued out of as many as 150 passengers.

"The number of victims of the Lebanese boat has reached 100 people so far after another body was recovered from the sea," Syria's official news agency SANA quoted the head of Syrian ports Samer Kbrasli as saying.

All survivors have been discharged from hospital, SANA said.

Nearly three years of deep economic crisis have turned Lebanon into a launchpad for migrants, with its own citizens joining Syrian and Palestinian refugees desperate to flee rising poverty via dangerous sea voyages.

Those aboard the ship that sailed from Lebanon's impoverished northern city of Tripoli were mostly Lebanese, Syrians and Palestinians, and included children and elderly people, the United Nations said.

Lebanon hosts more than a million refugees from Syria's civil war and has been mired in a financial and economic crisis branded by the World Bank as one of the worst in modern times.

Since 2020, Lebanon has seen a spike in the number of migrants attempting the perilous crossing in jam-packed boats to reach Europe.

The U.N. children's agency UNICEF said that 10 children appeared to be "among those who lost their lives," adding that "years of political instability and economic crisis in Lebanon have pushed many children and families into poverty."