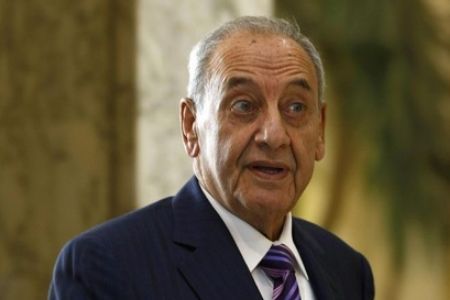 Parliament Speaker Nabih Berri called Tuesday for parliament to meet Thursday to elect a president to replace Michel Aoun whose term expires at the end of October.

It is unclear whether legislators in a deeply divided parliament will be able to reach a quorum for the session, raising prospects of renewed political paralysis.

The session will mark the first attempt by lawmakers to elect a new head of state at a time when the country is in the grips of a financial crisis described by the World Bank as one of the worst in modern times.

But it comes without any consensus on a replacement for Aoun amid a months-long political deadlock that has prevented the formation of a new government since the outgoing one's mandate expired in May.

With no compromise in sight among Lebanon's bitterly divided politicians, it may take several sessions of parliament before a president is finally named.

Marada Movement chief Suleiman Franjieh, an ally of Hezbollah who calls Syrian President Bashar Assad a "friend and brother," has the backing of some key parties but hasn't received the backing of a major Christian bloc.

The other announced candidates, Tracy Chamoun, the granddaughter of a former Lebanese president running on an anti-Hezbollah platform, businessman Ziad Hayek, and writer and women's advocate May Rihani have yet to receive any formal endorsements. Media reports have said that Army Commander General Joseph Aoun is a leading candidate in the race but his election would require a constitutional amendment.

Hezbollah's opponents, backed by the United States and Gulf Arab monarchies, are hoping to use their influence to ensure that Lebanon's next president is not an ally of Hezbollah. Separately, 13 independent reformist lawmakers are lobbying to try to push for a reformist president who would prioritize reforms and pull Lebanon out of the quagmire.

The post lay vacant for more than two years before Aoun was elected in 2016.

But with more than 80 percent of the population living in poverty and the currency having lost more than 95 percent of its value against the dollar since 2019, Lebanon can ill afford any delays.