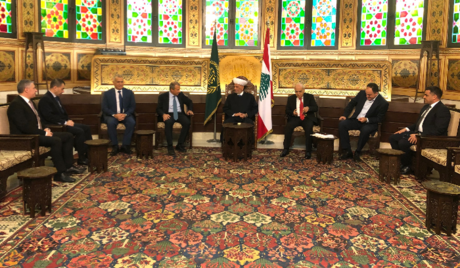 “We witnessed at the Dar al-Fatwa meeting patriotic stances on which all Lebanese agree. We came here to stress that we stand by the mufti in all the remarks that were voiced, especially as to the constitution and the Taef Accord in terms of decentralization, the creation of a senate and the abolition of sectarianism,” Bassil said after the talks.

“There is no dispute over Lebanon’s Arab identity and we’re convinced that Lebanon requires permanent embracement from the Arab countries,” Bassil added.

As for the presidential election juncture, the FPM chief warned that vacuum would be “lethal for Lebanon.”

“We stressed to the mufti that we have presented an alternative approach that is at our expense, but without giving up the president’s popular representation, whether directly or through support, which obliges us to reach consensus in parliament in order to elect a president,” Bassil added.