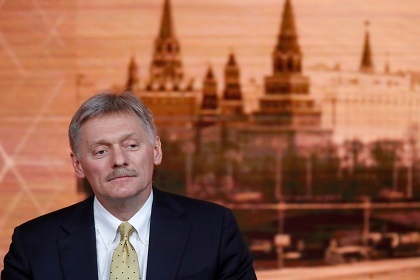 The Kremlin said Wednesday it was "stupid and absurd" to suspect that Russia was behind gas leaks on the Nord Stream pipelines to Europe, deemed to be a "deliberate act" by the EU.

Peskov said the leaks were "quite problematic" for Moscow.

"Both branches were filled with gas, ready for pumping, and this gas is very expensive. Now this gas is disappearing into the air," Peskov said.

"I want to urge everyone to think before making any statements, to wait for results of the investigation," he added.

"This is a situation that requires dialogue, prompt interaction on the part of all sides to find what happened. So far we see an absolute lack of such dialogue," Peskov said.

The pipelines have been at the center of geopolitical tensions in recent months as Russia cut gas supplies to Europe in suspected retaliation against Western sanctions following its military intervention in Ukraine.

Built in parallel to the Nord Stream 1 pipeline, Nord Stream 2 was intended to double the capacity for Russian gas imports to Germany.

But Berlin blocked the newly completed Nord Stream 2 in the days before Moscow sent troops to Ukraine.