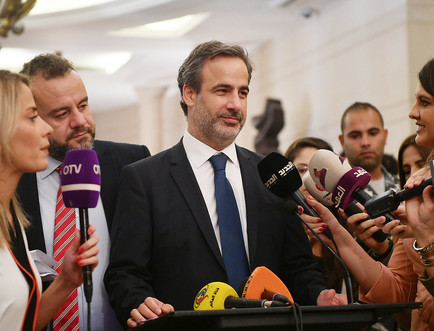 MP Michel Mouawad, who garnered 36 votes in the first round of the presidential election session on Thursday, said the session witnessed “a key step on the course of uniting the opposition,” seeing as “a significant majority from the opposition” voted for him.

“Today 36 MPs granted me their confidence and four expressed their support for me despite their absence for various reasons,” Mouawad said at a press conference after the session.

Thanking all the MPs who voted for him, the lawmaker said he represents “the choice of sovereignty, reform and accord among the Lebanese.”

He also stressed that “consensus cannot be built with arms outside the state nor through dragging Lebanon into certain axes.”

“Consensus is built on the basis of accepting the other and under the ceiling of the Lebanese state,” Mouawad added.

“My choice and what I represent is the choice of returning to the constitution, the Taef Accord, the state of institutions, the separation of the administration from politics and the independence of the judiciary, because justice is the basis of stability in Lebanon,” the lawmaker went on to say.

“I’m the son of (late president) Fouad Chehab and (slain president) Rene Mouawad and my choice is to return hope to the sons of the country and to build the state and its economy,” Mouawad added.

“If we stay alone, there won’t be a capability for change and salvation and I extend my hand to unite the opposition,” the MP said.

“If we stay separated, we won’t be able to achieve reform,” he added.