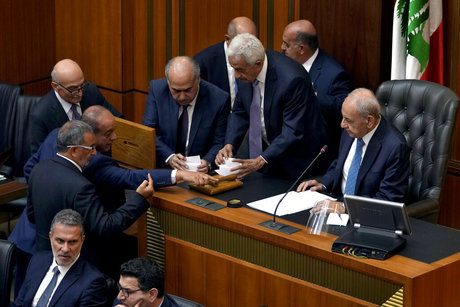 Lebanese Forces deputy chief MP George Adwan announced Thursday that the first presidential election session proved that the ruling coalition is “in disarray,” after the Hezbollah-led camp refrained from voting for any of its two likely candidates, Suleiman Franjieh and Jebran Bassil, opting instead to cast blank votes.

“The opposition managed to propose a candidate in a first step to broaden support and unite the opposition, and the furthermost thing that the establishment managed to do was to cast blank votes,” Adwan said.

“This is a sign of confusion, seeing as they have failed to agree on a name,” he added.

“We voted for Michel Mouawad and I call on all opposition parties to unite our efforts and what’s important is to secure the election of a sovereign and reformist president,” Adwan went on to say.

He added: “We’re not concerned with reaching an agreement with foreign forces and Michel Mouawad is made in Lebanon and is the son of martyr president Rene Mouawad.”

Kataeb Party leader MP Sami Gemayel for his part said the opposition has “a chance this month to work, communicate and unite our ranks as opposition, in order to deal with the other camp in a balanced way and to reach a solution for the country.”

“He should finalize the agreement with the International Monetary Fund and strengthen Lebanon’s ties with the world. He must also show openness towards everyone and must enjoy Christian support through the endorsement of one of the biggest two Christian blocs in parliament – the Free Patriotic Movement or the LF – or the support of both of them,” Abi Ramia added.

MP Ali Hassan Khalil of the Development and Liberation bloc said that Thursday’s session was “an invitation to all forces to talk to each other,” warning that “in the absence of consensus no new president can be elected.”

And as MP Tony Franjieh said that he cast a blank vote, MP Paula Yacoubian of the Change bloc said that “the Change MPs have a basket of names.”

“We demanded that they agree with us on the proposed names and despite the contacts, we did not find consensus over any of the names,” Yacoubian added.

And noting that the LF had agreed to the bloc’s initiative and on the idea of voting for someone who is not part of the traditional political alignments, Yacoubian pointed out that Michel Mouawad is “not outside this polarization.”