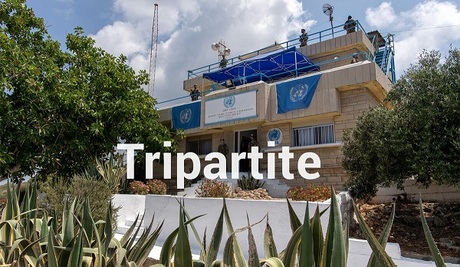 UNIFIL Head of Mission and Force Commander Major General Aroldo Lázaro on Thursday chaired a Tripartite meeting with senior officers of the Lebanese Armed Forces (LAF) and the Israeli army at a U.N. position in Ras al-Naqoura.

The UNIFIL chief highlighted that the U.N. Security Council, in recently renewing UNIFIL’s mandate had stressed the value of the meetings: “Resolution 2650 reiterated the importance of the Tripartite mechanism, strongly urging the parties to make constructive and expanded use of this forum.”

Discussions also focused on the situation along the Blue Line, air and ground violations, and other issues within the scope of UNIFIL’s mandate under U.N. Security Council Resolution 1701 (2006) and subsequent resolutions.

He also urged immediate action to address an increasing number of “incidents of aggressive behavior” along the Blue Line, underlining that it is vital at what is a sensitive time.

With the upcoming olive harvest, he looked forward to long-standing local arrangements assisted by UNIFIL. “This is of immediate and concrete benefit to local communities as a humanitarian arrangement.”

Since the end of the 2006 war in south Lebanon, regular Tripartite meetings have been held under UNIFIL’s auspices as an essential conflict-management and confidence-building mechanism.

“Through its liaison and coordination mechanisms, UNIFIL remains the only forum through which Lebanese and Israeli armies officially meet,” UNIFIL added in a statement.