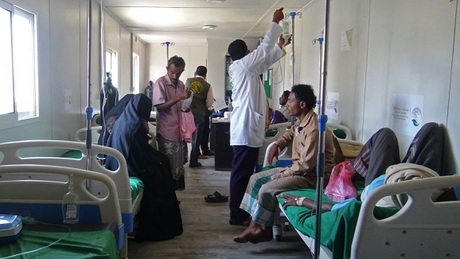 More than 40 humanitarian groups on Thursday called for an extension to the ceasefire in war-torn Yemen, calling it a "critical moment" for the country.

Ahead of the truce's current expiration date on Sunday, 44 aid agencies issued a joint statement to "remind all parties to the conflict that the future of the people of Yemen is in their hands."

Yemen's war between Iran-backed Huthi rebels and a Saudi-led coalition has left hundreds of thousands dead and created what the United Nations calls the world's worst humanitarian crisis.

"Now is a critical moment for the people of Yemen," said the groups, which include Oxfam, Save the Children and the Norwegian Refugee Council.

"While important gains have already been made, more time is needed to ensure that Yemenis can start to rebuild and recover their lives," they added.

The U.N.-brokered ceasefire, which took effect in April and has twice been renewed, has reduced casualties by 60 percent and quadrupled fuel imports into the rebel-held Hodeida port, the agencies said.

Renewed commercial flights from the capital Sanaa, seized by the Huthis in 2014, have allowed 21,000 Yemenis to access medical care and pursue study and business opportunities abroad, or reunite with relatives, they added.

"A longer extension of the truce would be the first step in further building upon the gains over the past six months and creating the stability needed to carry out longer-term assistance," the aid groups said.

"If the conflict restarts now, it not only risks destroying gains already made but threatens the future development of Yemen."

About 23.4 million of Yemen's 30 million population rely on humanitarian aid, the groups said.

The ceasefire's original terms included resuming commercial flights from Sanaa and fuel imports into Hodeida, and starting talks on the city of Taez that remains blockaded by the rebels.

Its second extension in August added a commitment to "reach an expanded truce agreement as soon as possible," U.N. special envoy Hans Grundberg announced at the time.