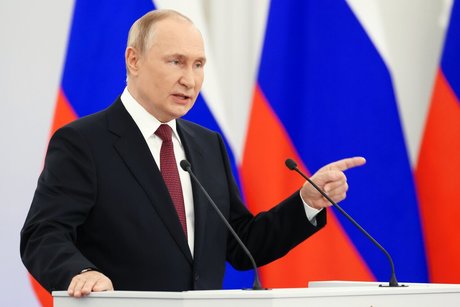 Russian President Vladimir Putin on Friday accused the West of organizing blasts that resulted in multiple gas leaks on the Nord Stream gas pipelines from Russia to Europe.

"Sanctions are not enough for the West, they have switched to sabotage. Unbelievable, but it is a fact!" Putin said during a televised speech at a Kremlin ceremony to annex four Moscow-occupied regions of Ukraine.

"By organizing explosions on the Nord Stream international gas pipelines that run along the bottom of the Baltic Sea they actually started destroying European energy infrastructure," Putin said.

"It is clear to everyone who benefits from this," Putin added, without providing further details.

Unexplained gas leaks, preceded by two explosions, occurred on the Nord Stream 1 and 2 pipelines on Monday.

Moscow and Washington both denied involvement in the incident.

The Nord Stream 1 and 2 pipelines have been shrouded in political tensions since the Kremlin sent troops to Ukraine in February.

Russia cut gas supplies to Europe in suspected retaliation against Western sanctions, but the pipelines still contained gas though they were not operational.