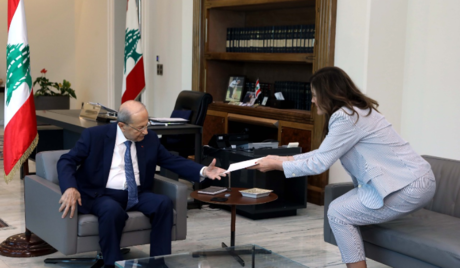 U.S. Ambassador to Lebanon Dorothy Shea on Saturday separately handed each of President Michel Aoun and PM-designate Najib Mikati a written proposal from U.S. mediator Amos Hochstein for the demarcation of Lebanon’s sea border with Israel.

The Presidency said Aoun called Speaker Nabih Berri and Mikati after receiving the proposal to consult with them over the issue in order to “give the U.S. mediator a Lebanese response as soon as possible.”

Al-Jadeed TV meanwhile reported that the letter “contains the final U.S. proposal that was drafted by Amos Hochstein regarding the demarcation of the maritime border.”

“The U.S. proposal includes a total separation between maritime and land demarcation and an agreement that any sea point agreed on would not later affect the demarcation of the land border,” al-Jadeed added.

A Lebanese official who attended the talks last month told The Associated Press that the proposal put forward by the U.S. envoy gives Lebanon the right to the Qana field, located partially in Israel's domain. A part of it stretches deep into a disputed area. The official added that the main point now is how to draw the demarcation line in a way that stretches south of Qana.

"The Lebanese response will be made as soon as possible, in preparation for the next step," an official at the president's office told AFP on Saturday on the condition of anonymity.

Last month, Aoun told the U.N.'s special coordinator for Lebanon, Joanna Wronecka, that "negotiations to demarcate the southern maritime borders are in their final stages."

They want to steal our sea, our gas, our fishes, desperate FPM will allow it !

Tick tock, tick tock ... do I sign, demand changes and hope revisions as fast enough, or leave a prepared choice waiting for the next president ... ... Choices choices ... think think think ..

Lebanon's border is Horizontal not Diagonal as purported lately. In 1943 when Lebanon's border was created (before the existence of the State of Israel) the border was horizontal. Over 60 years of corruption has turned a blind eye to Israeli occupation of these areas and redrawing digital maps. However the original maps stand.

ALL of the Qana and Karish field are Lebanese, large parts of the Tanin and Tamar are Lebanese. Even the very top of the Leviathan field is on the true Lebanese maritime border of 1943. Enough corruption.

All the Karish for Lebanon, and if they want to negotiate then 50% of the Tanin and Tamar fields split between Israel and Lebanon - plus 15% of the content of the Leviathan field to Lebanon.