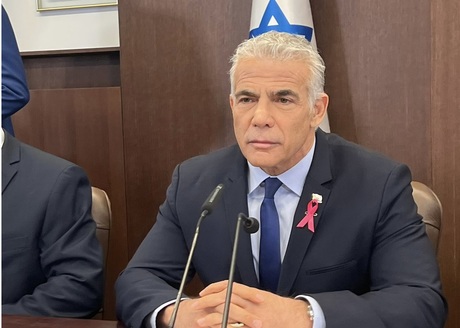 Israeli Prime Minister Yair Lapid on Sunday said that both Lebanon and Israel have “accepted the American mediator's proposal for an agreement on the maritime border between the countries.”

“We are conducting discussions on the final details, so it is not yet possible to congratulate on the finality, but as we demanded from day one, the proposal fully preserves Israel's political-security interests, as well as our economic interests,” Lapid told his Cabinet.

He added that Israel has been trying to reach this deal for more than ten years.

“The security of the north will be strengthened, the Karish rig will operate and produce gas, the money will enter the state coffers and our energy independence is guaranteed. This is a deal that strengthens Israeli security and the Israeli economy,” Lapid reassured.

He also said Israel would not oppose the development of "an additional Lebanese gas field" straddling the maritime border, as long as Israel receives "the share we deserve."

“Such a stockpile will weaken Lebanese dependence on Iran, curb Hezbollah and bring regional stability,” he added.

Lapid also said that the U.S. mediator’s offer is now “under legal review.”

“After the review is finished, we will bring the decision, together with Defense Minister Benny Gantz and Alternate Prime Minister Naftali Bennett, in coordination with the Legal Advisor to the Government, for discussion and approval,” Lapid went on to say.

On Saturday, the proposal was also delivered to Lebanese leaders.

Lebanon and Israel have been officially at war since Israel's creation in 1948 and both countries claim some 860 square kilometers of the Mediterranean Sea.

Amos Hochstein, a senior adviser for energy security at the U.S. State Department who has been mediating between the two neighbors, last visited Beirut in September, where he expressed optimism after meeting with Lebanon's leaders.

Lebanon hopes to unleash offshore oil and gas production as it grapples with the worst economic crisis in its modern history, plunging three-quarters of its population into poverty.

A Lebanese official who attended the talks last month told The Associated Press that the proposal put forward by the U.S. envoy gives Lebanon the right to the Qana field, located partially in Israel's domain. A part of it stretches deep into a disputed area. The official added that the main point now is how to draw the demarcation line in a way that stretches south of Qana. Lapid's comments appeared to be a reference to the emerging agreement over Qana.

Israel set up a gas rig at its designated location at the Karish field. Israel says the field is part of its U.N.-recognized exclusive economic zone, while Lebanon insists Karish is in a disputed area.

In July, the Israeli military shot down three unarmed drones belonging to Lebanon's Hezbollah flying over the Karish field. Hezbollah's leader has issued warnings to Israel over the maritime dispute, saying that "any arm" that reaches out to steal Lebanon's wealth "will be cut off."

The heavily armed group, which has fought several wars with Israel, has repeatedly said in the past that it would use its weapons to protect Lebanon's economic rights. Hezbollah officials have however said they would endorse a deal reached between Lebanon's government and Israel.

Hezbollah leader Sayyed Hassan Nasrallah in a speech Saturday echoed similar sentiments to Lebanon's top political leaders about Hochstein's proposal, and reasserted that the Iran-backed party will back the Lebanese political leadership's position. "God willing, if it reaches the desired and best result, it would be the result of national unity, cooperation, and solidarity," he said.

The only reason western nations aren’t helping Lebanon despite the famine and extreme poverty is not the lack of reforms but it’s because it’s weakening the positive perception of Hezbollah’s role by its base.

Not sure what Lapid is smoking. All what Lapisd and Biden care about is a deal before Israeli & US elections. Even if it means giving billions to Iran's Revolutionary Guard Talibans and Lebanon future natural resources to HizbIran and their Useful Idiots (Aoun/Bassil/Frangie) plus all the political mafia. Instead of our gas fields help the new generation get out of the abyss, Hizb & Aoun will pre-sell proceed for more Basij, oppression and corruption.