Lebanon requests 'amendments of specific sentences' in response to Hochstein 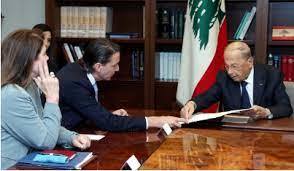 Lebanon has requested "amendments of specific sentences" in its response to U.S. mediator Amos Hochstein’s latest and final proposal, a Lebanese official involved in the negotiations said.

The remarks include "amendments of specific sentences so that there is no room for misunderstanding," the official added.

The official spoke to AFP on the condition of anonymity because he is not authorized to comment on the issue.

Lebanon said Monday it will send remarks to Washington's proposal to resolve a maritime border dispute with Israel over gas-rich waters.

The draft agreement floated by Hochstein aims to settle competing claims over offshore gas fields and was delivered to Lebanese and Israeli officials at the weekend, following years of indirect negotiations.

Crisis-hit Lebanon, which is grappling with its worst-ever financial downturn, will send its notes on the offer by "Tuesday at the latest," and hopes to receive a response "before the end of the week," Deputy Speaker Elias Bou Saab told reporters.

"We are not giving an official response but delivering an answer to the proposal with... remarks that we have," he added.

Bou Saab, tasked by President Michel Aoun to oversee U.S.-mediated negotiations, did not elaborate on Lebanon's feedback but said it included notes on "legal and logical" issues.

Prime Minister-designate Najib Mikati, who also spoke after the meeting, said that "things are on the right track."

Washington's offer has not been made public, but it has raised prospects for a deal that could help Lebanon explore potential gas wealth that the debt-ridden country desperately needs.

Lebanon and Israel are officially at war and their land border is patrolled by the United Nations.

They reopened negotiations on their maritime border in 2020, but the process was stalled by Lebanon's demand that the map used by the U.N. in the talks be modified.

The negotiations resumed in early June after Israel moved a production vessel near the Karish offshore field.

The latest proposal by Washington was welcomed by both Israel and Iran-backed Hezbollah, a major player in Lebanon that considers Israel its arch-enemy.

Hezbollah leader Sayyed Hassan Nasrallah, who had repeatedly threatened Israel with attacks if it proceeds with extraction in disputed areas before a deal is reached, said developments at the weekend were "a very important step."

Israeli Prime Minister Yair Lapid also welcomed the agreement, which he said grants Israel full claim over the disputed Karish field as well as profits from the nearby "Sidon reservoir", known as the Qana field, which will fall to Lebanon.

But Aoun on Monday said "there will be no partnership with Israel," while Bou Saab insisted Lebanon will have "full rights over Qana."

In the event that a final agreement is reached, Lebanon will not sign a treaty with Israel, Bou Saab said.

Instead, a mechanism will be put in place to register the demarcation with the United Nations.

Lebanon is currently grappling with its worst ever financial crisis, and fuel shortages have ground the country to a halt in recent months.

With a bankrupt state unable to deliver more than an hour or two of mains electricity a day, individuals, businesses and institutions have relied almost entirely on diesel-powered generators.

Lebanese politicians hope that commercially viable hydrocarbon resources off Lebanon's coast could help lift the country out of crisis.