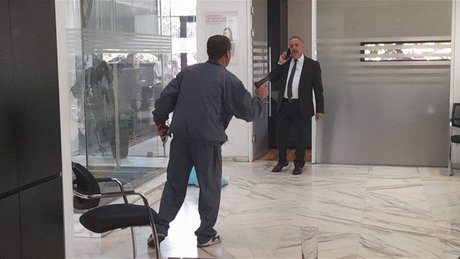 Four Lebanese banks were stormed Tuesday by depositors, a day after a man stormed BLOM Bank’s branch in Haret Hreik.

In the northern city of Tripoli, employees and workers of the Kadisha Electricity Company stormed a branch of the FNB bank in protest at the bank’s deduction of fees from their salaries.

Al-Jadeed TV said the employees threatened escalation unless their salaries are paid in full, as a Lebanese Army force intervened and staged patrols in the vicinity of the bank.

An Internal Security Forces retiree identified as Ali al-Saheli meanwhile stormed BLC bank in Chtaura, demanding to take his $24,502 deposit. Saheli was later arrested by security forces after a bank employee managed to seize the weapon from him.

"Count the money, before one of you dies," Saheli said in a video he recorded with one hand while waving a gun in the other. Employees struggled to calm him down, as protesters from the depositors group and bystanders watched from outside.

A depositors association said Saheli had repeatedly asked the bank to transfer $4,300 to his son who is studying in Ukraine, after he was expelled from his university and residence due to his failure to pay tuition and rent.

Saheli had also undergone medical checkups to determine if he could sell a kidney in order to secure the needed money, the association added.

The depositor Ali Hassan Hodroj meanwhile stormed Byblos Bank in the southern city of Tyre, demanding that he take his $44,000 deposit. The bank later agreed with Hodroj to give him a sum of LBP 352 million.

“The head of the Depositors Association, Hassan Mughniyeh, has entered into Bank Byblos in Tyre to receive the deposit from the depositor Ali Hassan Hodroj after the end of the negotiations,” al-Jadeed reported, adding that Hodroj will later turn himself in to security forces.

In Hazmieh, former Lebanese Ambassador to Turkey Georges Siam entered an Intercontinental Bank of Lebanon branch demanding some of his locked savings. The branch staff shuttered its doors while Siam continued to negotiate with management. Al-Jadeed TV reported that Siam was holding a "peaceful sit-in" inside the bank.

Some depositors' protest groups, including the Depositors' Outcry, have supported the break-ins and vowed to continue doing so.

"We're sending a message to the banks that their security measures won't stop the depositors, because these depositors are all struggling," Depositors' Outcry media coordinator Moussa Agassi told The Associated Press. "We're trying to tell the bank owners to try to find a solution, and beefing up security measures isn't going to keep them safe."

The general public have commended the angry depositors, some even hailing them as heroes, most notably Sally Hafez, who stormed a Beirut bank branch with a fake pistol and gasoline canister to take some $13,000 to fund her 23 year-old sister's cancer treatment.

The banks, however, have condemned the heists, and urged the Lebanese government to provide security personnel.

The Association of Banks in Lebanon in late September shuttered for one week after at least seven depositors stormed into branches and forcefully took their trapped savings that month, citing security concerns. The banks last week partially reopened a handful of branches, only welcoming commercial clients with appointments into their premises.