Jumblat: Mouawad not confrontation candidate but Franjieh is 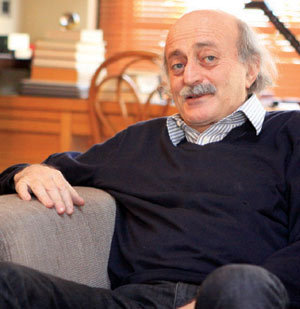 Progressive Socialist Party chief Walid Jumblat said overnight that he does not consider MP Michel Mouawad to be a confrontational presidential candidate.

“I do not consider Michel Mouawad a confrontation candidate. He is the son of Taef (Accord’s) martyr Rene Mouawad, and we want a president who would address the main controversial topics through dialogue. (Hezbollah’s) arms are one of these topics for example and the file should be tackled through a defense strategy,” Jumblat said in an interview on LBCI TV.

“We will continue to back Michel Mouawad… but the question is will they accept Mouawad as a consensus president?” Jumblat added.

“The scene in parliament was shameful at a time the majority of the Lebanese people are on the brink of collapse, and it seems that the March 8 camp has no candidate,” the PSP leader went on to say.

He added: “I don’t believe that Hezbollah with all its capabilities can bear further economic collapse and the Free Patriotic Movement is standing between it and Suleiman Franjieh. Let us see what their conditions are, knowing that there are no objective discussions with the FPM.”

Jumblat added that Franjieh is “nothing but confrontation and challenge candidate.”

As for the controversy over Hezbollah’s arms, Jumblat said: “Lebanon needs Hezbollah for defense, but what’s required is to have a single defense system under the authority of the Lebanese state, and this would later be translated in the defense strategy.”

Shame on Lebanese organizations and politicians who pretend sovereignty and civility,shame on Lebanese Shia, for not joining efforts and forming a human chain from Tyre to Tripoli in support I if Iranian women and basic human right in Iran! Enough hipocrisy!