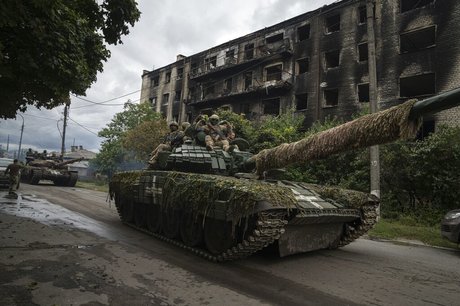 A Kremlin-installed official in the south Ukraine region of Kherson urged residents to remain calm Tuesday as reports were surfacing that Kyiv's forces were making sweeping gains into Russian-controlled territory.

Moscow this month called up hundreds of thousands of troops to bolster the military in eastern Ukraine where Kyiv's forces have recently made lightning advances and Defense Minister Sergei Shoigu meanwhile put the number at 200,000 as of Tuesday.

Ukraine's southern region of Kherson was one of the first where Kyiv's defenses collapsed in February after Russian forces invaded but Ukrainian forces recently have accelerated a months-long offensive to recapture it.

"Our artillery and fighter jets are hitting enemy forces that enter the sovereign territory of Russia," said Kirill Stremousov, the Moscow-appointed deputy head of the Kherson region.

"There is no reason to panic," he added in his message to residents of the Black Sea region on social media.

The reported gains into Kherson are a threat to the Kremlin's claim to have formally integrated the agriculturally rich region with a pre-war population of around one million people into the Russian Federation last week.

Some 80 percent of the region is estimated to be under Russian control.

"Yes, you can hear explosions at a distance, but they're infrequent," Stremousov said in his message.

He called on Kherson's residents to remain calm after his superior, Vladimir Saldo, conceded in an interview that Ukrainian forces had made a "breakthrough" in the region's north east, at the village of Dudchany along the Dniepr river.

But he claimed the push was short-lived and that Russian forces had pushed back again the advancing Ukrainian forces.

Ukrainian officials have so far remained silent about any concrete territorial gains but the head of the presidential administration Andriy Yermak on Tuesday posted emojis of watermelons on social media, hinting at gains in the region famous for the fruit.

Ukraine President Volodymyr Zelensky said in an address to the nation Monday evening said that "there are new liberated towns and villages in several regions."

"Fierce fighting continues in many sectors of the frontline," he added, claiming that "more and more occupiers are trying to escape."

Western officials have said that as many as 20,000 Russian troops could be at risk of being trapped on the western bank of the Dniepr river, which cuts diagonally through the region and flows into the Black Sea.

Ukraine's apparent gains in Kherson follow a similar trend in the eastern regions of Kharkiv and Dontetsk in recent weeks, with a series of setbacks coinciding with Moscow's claim to have annexed the regions.

The four territories -- Kherson and Zaporizhzhia in the south and Donetsk and Lugansk in the east -- create a crucial land corridor between Russia and the Crimean peninsula, annexed by Moscow in 2014.

Together, all five make up around 20 percent of Ukraine.

Shoigu said the Russian men mobilized to back up Moscow's forces were being trained at "80 training grounds and six training centers."

"As of today more than 200,000 people have entered the army," Shoigu during a televised meeting.

The Kremlin's mobilization has led to some protests and an exodus of men of military age -- with tens of thousands fleeing the draft, mainly to ex-Soviet neighbors.

Kazakhstan said Tuesday that more than 200,000 Russians had crossed into it in two weeks.