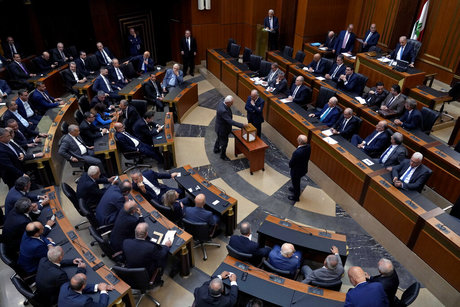 The International Support Group for Lebanon (ISG) on Wednesday emphasized “the importance of electing within the timeframe set by the Constitution, a new President who could unite the Lebanese people and work with all regional and international actors to overcome the economic and humanitarian crisis for the greater public good, most immediately by paving the way for comprehensive reforms and an agreement with the International Monetary Fund (IMF).”

“As the focus is now on the presidential election, it is important that an empowered new government is established that can implement the direly needed reforms. Now is the time for Lebanese politicians to swiftly reach a broad-based national consensus to avoid a multilayered executive vacuum,” the ISG added in a statement.

“The ISG notes with concern the insufficient progress in the implementation of the commitments made under the 7 April staff-level agreement with the IMF, notably the delay in adopting appropriate legislation on capital controls, bank secrecy, and bank resolution, as well as decisions towards unifying the multiple exchange rate system and restoring the health of the financial sector. The ISG calls on the authorities to accelerate their efforts to complete all outstanding prior actions,” it went on to say.

Deploring the lack of progress so far in the judicial proceedings in connection with the Beirut port explosion, the ISG called on Lebanese authorities to “do everything possible to unblock any hurdles to the completion of an impartial, thorough and transparent investigation.”

“The families of the victims and the Lebanese people deserve truth and justice without further delay,” it stressed.

Moreover, the ISG added that “it is incumbent on Lebanese leadership to deliver for the people and return Lebanon to a path of sustainability and progress.”

“Governance based on principles and undertakings that can underpin Lebanon’s stability and standing will be important to give the country a clear direction with the continued support of the international community. Ultimately, it is a matter of accountability towards the citizens of Lebanon and of rebuilding their confidence in the Lebanese state,” it said.

The ISG also underscored that it will continue to “stand by Lebanon and its people.”

The International Support Group has brought together the United Nations and the governments of China, France, Germany, Italy, the Russian Federation, the United Kingdom and the United States, together with the European Union and the Arab League. It was launched in September 2013 by the U.N. Secretary-General with former President Michel Suleiman to help mobilize support and assistance for Lebanon’s stability, sovereignty and state institutions.