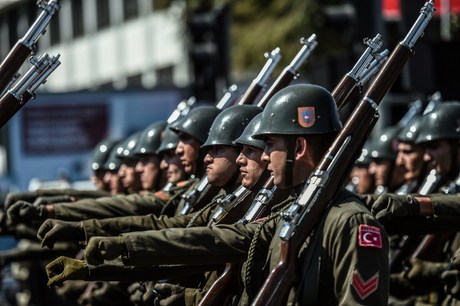 With a show of hands, lawmakers approved a motion to send an unspecified number of troops to the Gulf country for six months. Fikri Isik, a ruling party legislator and former Turkish defense minister, said the deployment would involve 250 troops and a corvette-class naval vessel.

The troops would be in addition to some 3,000 riot police that Turkey has said it would send to Qatar to reinforce security during the international soccer competition.

The force would be deployed against "various threats and especially terrorism" in Qatar, which expects to host more than 1 million visitors during the monthlong competition, the Turkish leader said.

Turkey has built close ties with Qatar and established a military base there.

Lawmakers from Erdogan's Justice and Development Party and its nationalist allies supplied the votes to pass the motion. Opposition parties criticized the deployment plans, accusing the government of allowing Turkey's army and police to be used like employees of "private security firms."

Earlier this year, the Interior Ministry announced that Turkey would deploy 3,250 Turkish police officers to Qatar. They include 100 special operations police and 50 explosives experts.