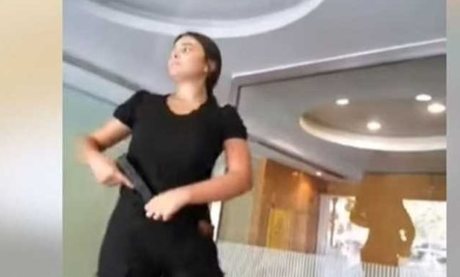 A Lebanese judge on Thursday fined and issued a six-month travel ban to a woman who stormed her bank with a fake pistol and took her trapped savings to cover her sister's cancer treatment.

Lebanon's cash-strapped banks have imposed strict limits on withdrawals of foreign currency since 2019, tying up the savings of millions of people. About three-quarters of the population has slipped into poverty as the tiny country's economy continues to spiral. The Lebanese pound has lost 90% of its value against the dollar.

Sali Hafez last month broke into a BLOM Bank branch in Beirut with activists from the Depositors' Outcry protest group, and stormed into the manager's office. They forced bank employees to hand over $12,000 and the equivalent of about $1,000 in Lebanese pounds.

Hafez was widely celebrated as a hero, and went into hiding for weeks.

Her lawyer, Ali Abbas, told The Associated Press that Hafez turned herself in Wednesday night, and that the bank had pressed charges. Another sister involved in the heist was with Sali.

"The judge decided to let them go on a bail of 1 million pounds each, and a six-month travel ban," Abbas said in a phone interview from the Justice Palace.

One million Lebanese pounds was once worth over $666, but has since devalued to $25.

Hafez left the Justice Palace and posed in front of media cameras with a raised fist and smile. She said she is going to her bank branch to sign a document confirming the amount of money she withdrew during her heist and the amount still locked in her account.

"But how about you give me the rest of my money while things are calm, so we don't have to go through that again?" she said to the press, addressing her bank's management.

Following the incident last month, the Depositors' Outcry had vowed to support more bank raids, and about a dozen of similar incidents have since occurred.

On Wednesday, Lebanese lawmaker Cynthia Zarazir staged a sit-in at her bank branch with a lawyer, demanding to withdraw $8,500 to cover expenses for a surgery.

These developments have rocked the Lebanese banks, who say they have been unjustly targeted for the country's fiscal crisis. The Association of Banks in Lebanon temporarily closed for a week, before partially reopening last week, citing security concerns.

Lebanon for over two years has been struggling to implement a series of reforms to reach an agreement with the International Monetary Fund for a bailout program and make its battered economy viable again.

So now the judiciary in Lebanon is claiming that someone who wants their own money back from the the bank and not a single cent or pound of anyone elses money is a criminal.
In any "normal" country, the bank, by refusing to return the deposits. is the criminal.

Wow!!! Thats is such an insightful comment. Did you come up with it yourself? Mr cringe phillipo.