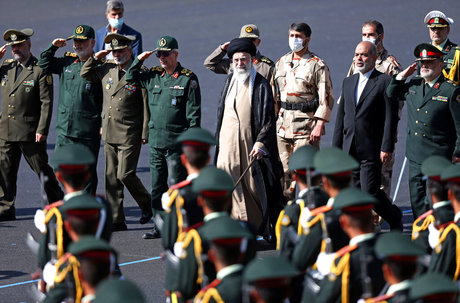 Protests in Iran over the death of a 22-year-old woman detained by the country's morality police have stretched into a third week, even after authorities disrupted the internet, deployed riot troops and attacked perceived enemies abroad.

That playbook of repression has worked before, but the spontaneous demonstrations over the death of Mahsa Amini persist and keep changing. In one recent incident, high school students chased away a hard-liner while famous politicians and actresses abroad now are cutting off their hair with scissors, following Iranian women protesters who have done the same.

The longevity and metamorphosis of the protests pose a new threat to Tehran, one unseen since the 2009 Green Movement protests brought millions to the street.

The seemingly spontaneous and leaderless protests — largely fueled by the middle and upper classes — share some of the same strengths and weaknesses of those over a decade ago. Iran's theocracy ultimately crushed them over time. Whether it will do the same now remains in question.

Getting a true picture of what's happening across Iran, a nation of over 80 million people that is two-and-a-half times larger than the U.S. state of Texas, is hard even in quiet times, given governmental restrictions.

Now, it's even more difficult. Authorities have detained at least 35 reporters and photographers since the demonstrations began Sept. 17, according to the Committee to Protect Journalists. Most information comes from just seconds-long video clips activists manage to upload to the internet.

The protests began at the burial site of Amini, an Iranian-Kurdish woman detained by the roving forces of Iran's morality police. Since the election of hard-line President Ebrahim Raisi last year, morality patrols have grown more aggressive, with videos circulating of officers manhandling young women over their clothes or loose mandatory headscarves, known as hijabs.

Iran's government insists Amini wasn't abused, with state television airing footage of her collapsing at a police station and receiving care. However, no video of her arrest or transportation to the police station has emerged even as Tehran began equipping police officers with body cameras five years ago. That, as well as a quick burial reportedly demanded by security officials, fueled anger in her hometown of Saqqez, some 460 kilometers (285 miles) west of Tehran.

At that demonstration and subsequent ones across the country, protesting women have twirled their headscarves and screamed in Farsi, "Death to the Dictator!", referring to Supreme Leader Ayatollah Ali Khamenei.

It's a dangerous cry in a country where charges of being a "mofsed-e-filarz," or a "corrupter of the Earth," through political dissent can carry a death sentence in Iran's closed-doors Revolutionary Court.

The full breadth of the demonstrations and crackdown remains unclear. An Associated Press tally of reports in state-run and state-linked media shows there have been at least 1,900 arrests connected to the protests. Demonstrations have been reported in at least 50 cities, towns and villages.

State television last suggested at least 41 people had been killed in the demonstrations as of Sept. 24. In the nearly two weeks since, there's been no update from Iran's government.

An Oslo-based group called Iran Human Rights estimates at least 154 people have been killed, though that includes an estimated 63 people killed in violence in the eastern Iranian city of Zahedan. Iranian authorities have described the Zahedan violence as involving unnamed separatists, though Iran Human Rights said the incident began as a protest over rape allegations against a local police officer.

Meanwhile, Iran has launched cross-border attacks on Kurdish separatists in Iraq as well and has insisted the demonstrations are a foreign plot — all apparently designed to distract from the widespread anger over Iran's mandatory hijab.

Since Iran's 1979 Islamic Revolution and the chaotic years that immediately followed, demonstrations have been a common feature across the country. Many focus on local issues rather than nationwide political change, such as farmers upset about the drying up of the country's water supplies, teachers wanting higher salaries or pensioners angry after losing their savings in widely criticized privatization drives.

Student protests struck Tehran in 1999. Economic protests swept the country at the end of 2017 and into early 2018. And in 2019, anger over the government eliminating subsidies on gasoline similarly sparked nationwide demonstrations.

Unlike those prior three waves, this time hard-liners control every lever of power across Iran's presidency, its judiciary and its parliament, meaning there's no one else for them to blame. The same happened in the 2009 Green Movement demonstrations, sparked by hard-line President Mahmoud Ahmadinejad's re-election amid widespread allegations of vote rigging.

The 2009 demonstrations also focused on urban areas and predominantly saw middle- and upper-class protesters. The current protests have seen similar groups of people taking part, with witnesses saying they've heard none of the economic chants from the most recent rounds of demonstrations. Iranian celebrities and soccer stars also have spoken out.

However, there are still clear differences between 2009 and today. The 2009 demonstrations saw millions take to the street. So far, the current protests haven't galvanized such large crowds all at once.

The 2009 demonstrations also lasted for months before slowing down, ultimately ending in 2011 when authorities arrested their leaders amid the Arab Spring protests. The current demonstrations have yet to reach the four-week mark

Crucial moments lie ahead. Iran appears bracing for Saturday, the start of the Iranian week, when university students should resume classes in person. Last Sunday, security forces fired tear gas and pellet guns at students demonstrating at Sharif University of Technology in Tehran, according to the New York-based Center for Human Rights in Iran. That university and others went to online classes for the rest of the week.

If demonstrations continue in classrooms and streets across Iran, Iran's hard-line government will have to decide what to do next. So far, there's no sign that they'll back down, however.