Ziad Hayek to Naharnet: My presidential chances have surged 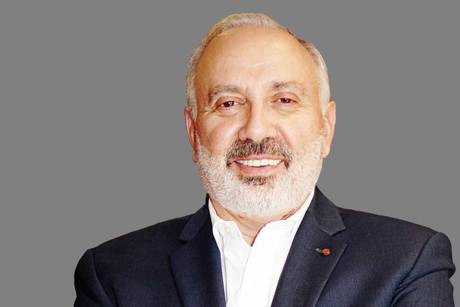 Hayek, 63, was Secretary General of Lebanon's High Council for Privatization and PPP from 2006 until he was nominated to be President of the World Bank in February 2019. Hayek is currently Vice Chair of the Bureau of the U.N. Economic Commission for Europe Working Party on PPP, Head of the International Center of Excellence in PPP for Ports, President of the World Association of PPP Units & Professionals, Member of the Board of Trustees of the Holy Spirit University of Kaslik, Member of the Investment Committee of World YMCA, and High Commissioner for Lebanon at the World Business Angels Investment Forum.

A citizen of the U.S., the UK and Lebanon, Hayek speaks 11 languages. He is fluent in Arabic, English, French, Spanish and Portuguese and familiar with Italian, Persian, German, Russian, Hebrew and Aramaic. He has been a resident of Lebanon, Mexico, the U.S., Bahrain, Gabon and the UK. In 2014, he was made Officer of the National Order of the Cedar, the highest state order of Lebanon.

Below is the English-language interview that Naharnet has conducted with Hayek:

Q: You have said that you intend to resolve Lebanon’s crisis rather than manage it. Do you think that the president’s current powers give you the ability to do that?

A: Under our Constitution, the Presidency may not have direct decision-making powers to affect policy directly, but it does confer on its incumbent wide leeway in shaping the general direction of policies, whether through the choice of Cabinet members or through active participation in the meetings of the Council of Ministers.

Q: Which political parties have said that they might endorse your nomination?

A: I may not be the first choice for President of any political party, but I am very well positioned as an alternative option for all of them. This is my biggest advantage over other candidates.

Q: Do you consider yourself a “change” president and have you communicated with the 13-member “change” bloc?

A: I certainly do consider myself a change candidate and was one of the leaders of what used to be called the “civil society”. I have communicated with most of the “change” bloc members, but they have not yet managed to agree on a viable candidate for the bloc.

Q: How high are your chances to reach the Baabda Palace? Please give a specific percentage.

A: I used to say that my chances were less than 10% because there were many rumored candidates. Today, I believe that the field of candidates who have proven themselves to be credible and viable has narrowed down to less than four candidates.

Q: Would you resign as president if the political forces start obstructing your plans?

A: Under our constitution, the President does not have “a plan”. The President’s role is to shepherd the country’s political factions and help them achieve what plans they have, which lead to the country’s national interest.

Q: Do you think President Aoun should have resigned in the wake of the October 17 uprising or the Beirut port explosion?

A: I do not believe that he should have resigned in the wake of the October 17 uprising because that was an event he was not directly responsible for. The case of the Beirut Port explosion is different. If he had been informed about the danger of storing the ammonium nitrate at the port and about the urgency of dealing with the situation, yet he took no action, then he is considered directly responsible and should resign.

Q: What is one thing that President Aoun could have done during his term but didn’t?

A: He could have acted presidential but chose to act factional.

Q: Who was the most successful president in Lebanon’s history?

A: Fouad Chehab is generally believed to have been the most successful president, but I am biased toward Camille Chamoun.

Q: If elected president, would you prefer your first government to be technocrat, political or techno-political?

Q: Who is your political/economic idol(s) at the international level?

A: Angela Merkel, on both counts.

Q: You have suggested that there should be a lengthy and daily dialogue with Hezbollah in order to resolve the controversy over its weapons. Have you thought of a specific mechanism for achieving that and do you intend to form a permanent dialogue committee in this regard?

A: I believe I referred to “regular”, not “daily”, but yes, it should be serious and continuous until the controversy is resolved. The mechanism I envisage includes at least three specialized committees to negotiate and deal with political issues, security issues, and military issues.

Q: Are you in favor of privatizing all state-owned enterprises?

A: Yes, but not in their current state – only after they have been properly reorganized and made profitable. This would likely be years from now. In the meantime, regulatory authorities should be created, with the objective of liberalizing the relevant markets and preventing both private and public monopolies.

Q: Do you have concerns that the people and the change and opposition forces might consider you part of the corrupt system in light of your previous work in state administrations, at the Grand Serail and with four ex-PMs?

A: I am sure that some shallow minds might stop at such a stereotypical description, but I am hoping that more intelligent ones would dig deeper and prevail.

Q: Do you support a full normalization of ties with Syria or do you want to merely improve economic and logistical cooperation?

A: I support any level of normalization and/or cooperation as Lebanon’s national interest may require.

Q: Do you think Lebanon should be the last Arab country to sign a peace treaty with Israel?

A: No, I don’t. We should regain our national dignity and make our own decisions, as and when we wish to make them.

Q: Will you immediately call on expats to return and invest in Lebanon?

A: No, we would need to regain the trust of investors (including expats) before we call on them to return.

Q: In your opinion, what is the best electoral law?

A: One man/woman, one vote; with one MP per district; in a smaller Parliament of likely 66 MPs.

Q: Are you in favor of an immediate abolishment of political sectarianism?

A: Yes, in Parliament, in tandem with the creation of a Senate. No, at the level of ministers and director generals.

Q: What would be the priorities of the Social Solidarity Fund that you intend to establish and would it include free or affordable healthcare?

All this list of accomplishment means nothing if he does not believe that priority is to restore Lebanon's independence, sovereignty and democracy; and allows no arms outside army. This is the foundation for recovery and without it all efforts will be wasted, Lebanon will remain bankrupt and isolated run by the Nasij and political mafia, and the diaspora and world community will avoid Lebanon like a plague. Deja vue!

All I can tell, if he’s a decent being then he won’t stand a chance for the elections. Lebanon is and has been ruled by crooks for quite some time with a few exceptions like Rafik Hariri for instance.

I wonder what our soon to be ex president's list of 'qualifications' would have been.

And at least this guy can talk to others in the international community without sounding like an idiot or through a tool like bassil.

Few issues I have with this candidate:

When are aspiring politicians, candidates etc... stop lying to the public about this stupid "Strategic Defence" with Hizbos? There is no such thing. Hizbos arms are controlled, supplied, manufactured, directed by the IRG. The only way to get rid of them is get rid of the Regime in Tehran. Full stop.

When asked about privatization of state assets he said not now? BS. It's either now or nothing will ever happen.

He admires Angela Merkel. No thanks. That rang bells for me. Merkel was too weak. She was not a Margatret Thatcher.

Electoral law. That I agree with him. One man One vote is the only way to have true acyl democratic process and 1 MP per district. Yes reduce the number to 66.

He says he wants a techno-political cabinet. In other words back to square one of divvying up the seats sectarian wise.

I did not like his answer about future relations with Syria.

Nah I think I'll pass on him

He speaks 5 languages then why write 11? Being "familiar" with a language is not the same as speaking it. That alone is a red flag. Whenever you meat a lebanese bragger then run. Trying to pass as some sort of genius. He seems like one of those show offs and they absolutely can not be trusted. And his answers are vague so that their meaning can be twisted later on to have meant this o that, like a typical shady politician.