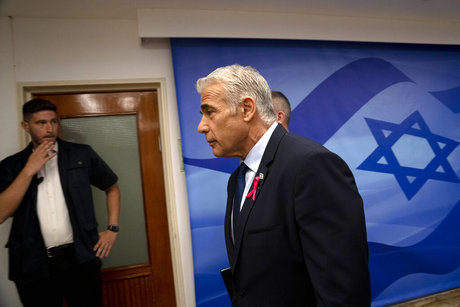 Israel’s security and political affairs cabinet has held a session that lasted three and a half hours to discuss the Lebanese remarks to draft sea border demarcation agreement presented by U.S. mediator Amos Hochstein to both parties.

“As expected, the session did not produce any decisions and not much of its discussions has been leaked,” Lebanon’s al-Akhbar newspaper reported on Friday.

Israeli Prime Minister Yair Lapid “was receiving the latest updates from the Americans during the session” and he was quoted as saying at the end of the meeting that “the Biden administration is trying to press Lebanon to back down from some of its remarks or reservations, in order to reach a gas agreement according to the original format put forward by mediator Hochstein,” the daily reported.

“We need to avoid cries of war. We are also trying to reach agreements at the moment,” Lapid added.

Israeli army chief Aviv Kohavi for his part said that “the agreement with Lebanon is good and preserves the Israeli security interest.”

The representatives of Israel’s security and intelligence agencies also agreed that the draft deal reached prior to the Lebanese remarks is good for Israel and must be signed.

A senior Israeli official had said Thursday that it Israel would reject Lebanon's amendments to the U.S.-drafted proposal. Hochstein later told Lebanon that Israel had only rejected some of the Lebanese remarks and not the entire agreement.

Israel had welcomed the terms set out by Hochstein and said they would be subjected to legal review, but gave no indication it sought substantive changes. Lebanon presented its response to Washington's proposal on Tuesday.

Washington's terms were also welcomed by Iran-backed Hezbollah, a major player in Lebanon that considers Israel its arch-enemy.