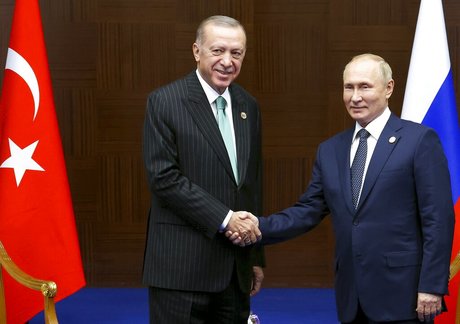 Turkish President Recep Tayyip Erdogan said Friday that Turkey and Russia have instructed their respective energy authorities to immediately begin technical work on a Russian proposal that would turn Turkey into a gas hub for Europe.

Russian President Vladimir Putin has floated the idea of exporting more gas through the TurkStream gas pipeline running beneath the Black Sea to Turkey after gas deliveries to Germany through the Baltic Sea's Nord Stream pipeline were halted.

Erdogan said Russian and Turkish energy authorities would work together to designate the best location for a gas distribution center, adding that Turkey's Thrace region, bordering Greece and Bulgaria, appeared to be the best spot.

"Together with Mr. Putin, we have instructed our Ministry of Energy and Natural Resources and the relevant institution on the Russian side to work together," Erdogan was quoted as saying. "They will conduct this study. Wherever the most appropriate place is, we will hopefully establish this distribution center there."

"There will be no waiting," Erdogan said in his first statement on the Russian proposal.

The Turkish leader made the comments on Thursday on his return from a regional summit in Kazakhstan where he met with Putin. His words were reported by Hurriyet newspaper and other media.

Turkish Foreign Minister Mevlut Cavusoglu said Putin proposed shipping gas to European countries that want it via Turkey because he no longer considers Nord Stream 1 and 2 to be "reliable" conduits.

The minister said, however, that the Russian proposal needs "to be studied well."

"There are investments that need to be made, they need to be examined," he said during a joint news conference with his Qatari counterpart. "This is a matter of supply and demand. How much of Europe ... is ready to buy gas from such a project? This needs to be worked out together."

Turkey has long aspired to become an energy hub.

Energy analysts have, however, questioned the likelihood of the proposal to ship gas to Europe via Turkey getting off the ground, with European leaders criticizing Russia's reliability as an energy supplier and calling Russia's cuts in natural gas a political bid to divide them over their support for Ukraine.

Germany this week rejected another proposal by Putin to step up gas flows to Europe via a link of the Nord Stream 2 pipeline under the Baltic Sea — a pipeline that has never been operational. Moscow cut off the parallel Nord Stream 1 gas pipeline over what it claimed were technical problems.

Asked to comment on an assertion by Putin that Russia had foiled an attack on the TurkStream gas pipeline, Erdogan said Turkey was taking every step necessary to secure the pipeline.

NATO-member Turkey, which depends on Russian for its energy needs and tourism, has criticized Moscow's actions in Ukraine but has not joined U.S. and European sanctions against Russia.

It has maintained its close ties with both Moscow and Kyiv and positioned itself as a mediator between the two. Ankara recently helped broker key deals that allowed Ukraine to resume grain exports and led to a prisoner swap between Ukraine and Russia.