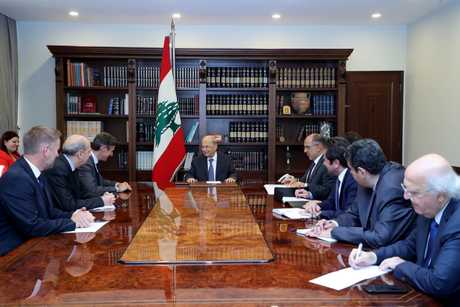 President Michel Aoun on Tuesday told a delegation from French oil giant TotalEnergies that exploration for gas in Lebanon’s offshort Block 9 “should start quickly to make up for the time that was lost during the indirect negotiations for the demarcation of the southern maritime border.”

According to the state-run National News Agency, the delegation briefed Aoun on the procedural and administrative preparations that TotalEnergies is carrying out in Lebanon ahead of the start of exploration in Block 9.

Expressing their delight to work again in Lebanon following TotalEnergies’ previous work in Block 4, the delegation’s members said a drilling platform will be brought to Lebanon in 2023 in order to begin exploration according to the texts of the agreement with Lebanon’s petroleum administration.

The delegation added that the Lebanese petroleum administration would be regularly supplied with any new data made available by the exploration operations.

He slept for most of his six years, only waking up long enough to pump up Bassil and give away our some of maritime right. Now, with some two weeks left in his term, he pretends to look busy. What a laugh.

Rarely do people have the chance to view in real time and in full details two massive ongoing crimes against humanity. The first crime is the brutal suppression by the Iranian regime of a peaceful demonstration carried by an oppressed population. These courageous demonstrators that have alredy suffered more victims than in Beirut explosion are fighting for their basic human right while totally ignored by Biden and Europe only care about a nuclear deal with Iran to secure blood energy. The other crime is the ransom being paid to Hizbollah, Aoun and the political mafia that hold Lebanon hostage via the maritime gas deal without freeing any Lebanese from Basij occupation. This allows Hizb and the political mafia to siphon profit from selling gas contracts and infrastructure bids to build a more corrupt and brutal prison for Lebanese to insure future generations remain in hell while they amass more power and profit… All with the blessing of Biden and Macron!