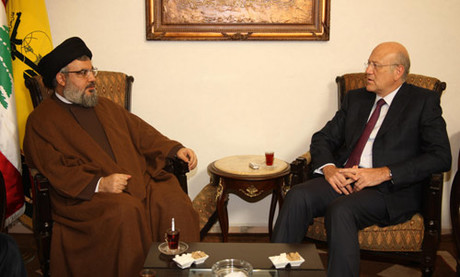 The relation between Hezbollah and Prime Minister-designate Najib Mikati is at a dangerous juncture, al-Akhbar newspaper reported Wednesday.

The daily quoted informed sources as saying that the ties between Hezbollah and Mikati cannot remain as they were in the past years if the latter insists on "the vacuum scenario."

In a farewell meeting on Tuesday, President Michel Aoun had told Mikati that he cannot guarantee that the Free Patriotic Movement will grant confidence to the government, al-Akhbar sources said.

"We don’t want to take part (in the government). They want to force us into granting confidence to the government although we are not convinced of it or its premier," FPM chief Jebran Bassil said in a press conference.

Mikati swiftly hit back, urging for solidarity and cooperation instead of accusations.

"He wants a government that usurps the president’s powers," Bassil had said about Mikati, adding that the FPM "will not allow" it.

The sources said that Hezbollah and General Security chief Maj. Gen. Abbas Ibrahim are still trying to resolve obstacles, behind the scenes.