4 spots in CL up for grabs; Bayern, Napoli chase perfection 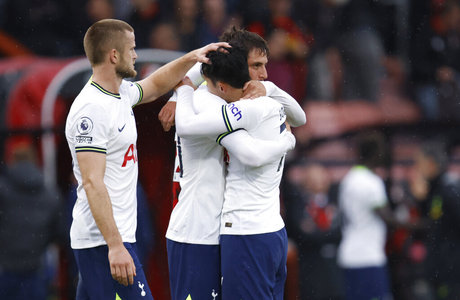 The Champions League has reached the final round of group-stage matches, with four spots in the lineup for the last 16 still up for grabs.

Here's what to look out for this week:

Eight teams are still in contention for the knockout stage with four of them all coming from the same group.

It's everything to play for in Group D, with just two points separating top-place Tottenham and Marseille at the bottom. Those two teams face each other in France on Tuesday, while Sporting Lisbon hosts Eintracht Frankfurt.

A draw will be enough to see Tottenham qualify but all of the teams in the group know a win will ensure qualification.

AC Milan and Salzburg meet at the San Siro on Wednesday to decide which team joins Chelsea in qualifying from Group E. A draw would be enough for Milan.

Leipzig needs to avoid a loss against Shakhtar on Wednesday in Group F to secure progress to the round of 16. Shakhtar would advance with a win.

Ukrainian club Shakhtar had a tough task just to play in the Champions League again following the Russian invasion. Now it could fly the Ukrainian flag in the last 16.

Shakhtar has to play its home Champions League games in Poland because of the war and is fielding a young squad after FIFA allowed foreign players to suspend their contracts with Ukrainian teams and play elsewhere. Coach Roberto De Zerbi left and the Ukrainian league shut down for six months from February to August. Shakhtar's league game Saturday was interrupted for more than an hour by an air-raid alarm.

Despite that, Shakhtar has stayed competitive and knows it will qualify from its group if it beats Leipzig. Shakhtar is assured of placing at least third and continuing its unusual European season in the Europa League.

Bayern Munich, Chelsea and Manchester City are the only teams to have already won their groups heading into the final matchday.

Real Madrid will win Group F — regardless of rival Leipzig's result — by beating Celtic at home on Wednesday.

Napoli will be the Group A winner if it avoids defeat at Liverpool on Tuesday by four goals or more in a match between two teams already sure of progressing.

Paris Saint-Germain and Benfica are the teams advancing from Group H. They each have 11 points before closing matches at Juventus and Maccabi Haifa, respectively, on Wednesday.

In Group B, Club Brugge leads Porto by a point and both teams have already qualified. They finish against teams who are fighting to finish third to reach the Europa League knockout round playoffs. Brugge visits last-place Bayer Leverkusen on Tuesday and Porto hosts third-place Atletico Madrid.

Only 10 teams have finished a single Champions League group stage with six wins from six matches. There could be two more this week.

Bayern could achieve the feat for the third time with a victory on Tuesday in Group C over Inter Milan, which is already guaranteed to finish in second place so may choose to rest some players.

Napoli is looking to become the first Italian team since AC Milan in 1992 to have six straight wins in its group, but has to win at Anfield to do so.

Rangers and Viktoria Plzeň have zero points ahead of group closers at home to Ajax and Barcelona, respectively.

The draw for the last 16 takes place at UEFA's headquarters in Nyon, Switzerland, on Nov 7.