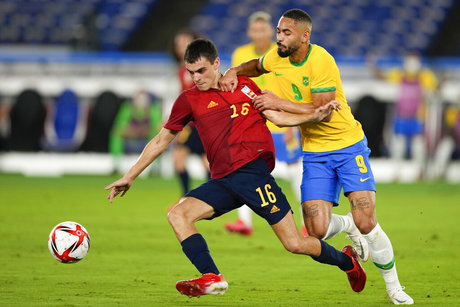 Spain's Pedri González will highlight the list of teenagers who could make an impact at the World Cup. Others include England's Jude Bellingham, Germany's Jamal Musiala and American teammates Gio Reyna and Yunus Musah.

All five players are 19, although Reyna turns 20 on Nov. 13 and Pedri and Musah will both turn 20 during the tournament in Qatar.

Like his childhood idol Andrés Iniesta, Pedri is becoming a fixture in midfield for both Barcelona and Spain. While he does score goals occasionally, it's Pedri's passing and footwork with the ball that set him apart — just like Iniesta. "I always loved Iniesta and his way of playing soccer, because of how he was both on and off the field," Pedri told The Associated Press in an interview last year. "He has been my reference and I have tried to model myself on him." A member of Spain's team that lost last year's Olympic final to Brazil, Pedri will attempt to help his squad go one step further in Qatar.

While playing for Borussia Dortmund in October, Bellingham became the third teenager to score in four consecutive Champions League appearances after Erling Haaland (five appearances ending in November 2019) and Kylian Mbappé (four appearances ending in April 2017) — with one significant difference: Bellingham is a midfielder, not a striker like Haaland and Mbappé. That's because Bellingham is able to use his 6-foot-1 (1.86-meter) frame to muscle off opposing players both while defending and attacking. A strong World Cup will only increase Bellingham's price on the transfer market, as he'll be expected to follow Robert Lewandowski's and Haaland's examples and leave Dortmund for one of Europe's top clubs after this season.

Able to play any position in midfield, Musiala could be the key to Germany's revival following a group-stage exit four years ago in Russia as defending champion. Born in Germany to a Nigerian father and a German mother but raised mostly in England — the team he played for at the under-21 level — Musiala said he "just listened to my feelings" when he decided to represent Germany at the senior level. Already known for his passing skills, Musiala is also showing off his scoring abilities this season with eight goals in 15 appearances in all competitions for Bayern Munich. His impact was witnessed when he was involved in three of the four goals in Bayern's 4-0 win over Bayer Leverkusen in September.

The son of former United States captain Claudio Reyna never saw his dad play for the national team. That's because Gio was too young when Claudio made his last national team appearance in a 2006 World Cup loss to Ghana. His mother, Danielle Egan Reyna, also played for the United States briefly in 2003. An attacking midfielder or winger, the younger Reyna is back in form following an injury-plagued 2021-22 season. He curled a strike inside the far post for Borussia Dortmund in a win over Stuttgart in the German league last month. Reyna's previous appearance against Stuttgart had ended when he sustained a muscle and tendon injury just after kickoff — ending last season prematurely in April.

Born in the United States to Ghanaian parents, Musah grew up mostly in Britain and played for England's youth teams before ultimately deciding to represent his birth nation. A midfielder, Musah helped Spanish club Valencia to last season's Copa del Rey final but was the only player to miss his spot kick in a penalty shootout, which led to Real Betis winning the trophy. Having recently returned from a groin injury, Musah is a first-choice midfielder for United States coach Gregg Berhalter, along with Tyler Adams and Weston McKennie.

Born in a Ghana refugee camp to Liberian parents, Davies, who turns 22 on Nov. 2, is a regular at left back or on the wing for Bayern Munich. He made a big impact in helping Canada qualify for the World Cup for the first time since 1986.

The 23-year-old Leão was instrumental in helping AC Milan win the Serie A title last season and has been even better in the Italian league this campaign. With Rafa Silva having recently announced his retirement from Portugal's national team, Leão will likely be Cristiano Ronaldo's preferred strike partner in Qatar.

Among the early high scorers in Serie A with Salernitana this season (on loan from Villarreal), Dia worked as an electrician before his soccer career took off. He scored against Liverpool in the semifinals of last season's Champions League.

Napoli fans protested when defensive stalwart Kalidou Koulibaly was sold to Chelsea and the lesser-known Kim was brought in as a replacement at center back. But Kim has been a big part of Napoli's sensational start to the Italian league and was named Serie A player of the month for September.

An attacking midfielder, the 22-year-old Kudus had scored nine goals in 16 appearances for Ajax in all competitions by the end of October.