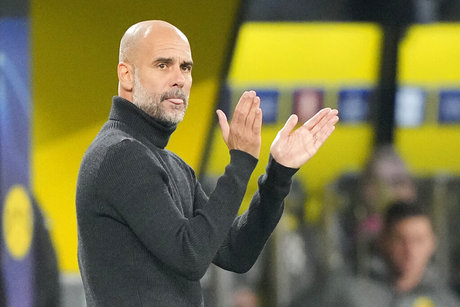 Kyle Walker and Kalvin Phillips should recover from their injuries in time to be available to England for the World Cup, Manchester City manager Pep Guardiola said on Tuesday.

England coach Gareth Southgate will announce his squad next week and is unlikely to see Walker or Phillips return to action before naming his 26-man group for the tournament that starts on Nov. 20.

"It's likely, the way they recover," Guardiola said, when asked about the two players' chances of being fit for the World Cup. "I don't know the intention for Gareth, but it's likely.

"He spoke with the players regularly, with the doctors, and they know exactly better than me. But what I hear in the dressing room, it's likely they can be ready."

Walker underwent a groin operation last month, while Phillips had surgery on his shoulder in September. Both played a key role in England's run to the European Championship final last year.

Guardiola said Phillips was ahead of Walker in his recovery but was still doing only "partial" and "non-contact" training sessions.

"I know how important the World Cup is," Guardiola said. "But I'm not going to use a player I feel is not ready for the physicality, the rhythm."

What's certain is that neither Walker nor Phillips will play against Sevilla in the Champions League on Wednesday in a game that has little riding on it for either team. City is sure of topping the group and Sevilla will finish third.

Erling Haaland will also miss the game at Etihad Stadium, Guardiola said, after being ruled out of the 1-0 win at Leicester in the Premier League on Saturday because of ligament damage in his foot.

Guardiola said City's star striker is improving but "still not 100%" and is not training with the team.

"We don't want to take a risk, there's no sense," Guardiola said. "Hopefully we can have him against Fulham (on Saturday)."