Flowery facelift for heart of revolt in Iraqi capital 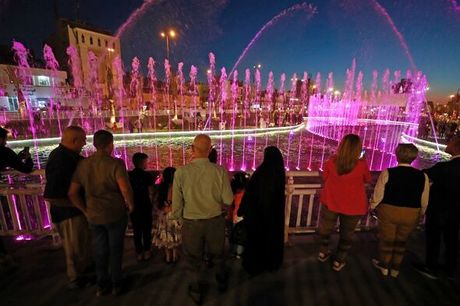 Three years ago, Fadel Abbas marched with tens of thousands of fellow Iraqis chanting for the "fall of the regime" in Baghdad's Tahrir Square, meaning "liberation" in Arabic.

The epicenter of the October 2019 anti-government protest movement, the square is now transformed and boasts a renovated park section, and Abbas sells coffee where he once shouted slogans.

"Here, many people were wounded and killed: young men, young women, doctors," recalled Abbas, 21, offering cups to passers-by from flasks on his back.

"We were just demanding our rights."

A scar runs across his left hand, a reminder of the violent crackdown unleashed by the security forces three years ago.

More than 600 people were killed and thousands injured during the unprecedented protests, where demonstrators denounced corruption, their "negligent" politicians, and the influence of neighboring Iran.

The wave of protests gradually died down in early 2020 as coronavirus pandemic restrictions took hold.

Today, little is left to physically mark the events, but another former protester, Ali Ryad, 29, pointed towards the nearby Tigris river and recalled that "even the bridges witnessed the bloodshed".

Tahrir Square is where the city's main boulevards on the eastern bank of the Tigris river converge at a roundabout built in 1937.

The iconic Freedom Monument, a 50-metre (165-foot) long bas relief made of concrete and metal, honors the 1958 revolution which overthrew Iraq's monarchy.

Recent restoration work has given the square a fresh look.

Alongside the monument, a previously abandoned promenade has been paved and planted with gardens of flowers and palm trees.

"We want to transform it from a place linked to martyrs into one linked to happiness", said writer Souad al-Gohary, taking pictures under the monument with a group of cyclists.

"Blood was shed in this square. We want to transform it to reflect happiness and progress for Iraq."

Tahrir Square is now one of the few green spaces in Baghdad, a metropolis suffocated by concrete and cars.

Around the edge, the roar of traffic eases only after dark.

The city's eight million inhabitants have only one large public greenspace available to them, the Zawraa park, where entrance requires buying a ticket.

Baghdad resident Um Lamar, 36, said she had come to see the renovations in the park on her day off, enjoying a space that was "previously unreachable" during the protests.

Sporadic demonstrations are still held in front of the Freedom Monument, but they are far from resembling the waves of people seen in 2019, even though the concerns which drove the protest movement remain.

Sometimes a handful of young graduates rally to demand jobs. Other times sympathizers of the Shiite Muslim cleric Moqtada Sadr pound the pavement in the square.

Only one seemingly abandoned building still symbolizes the 2019 protests: the "Turkish restaurant", the largest building on the square, and the former headquarters of the demonstrators.

On its walls, graffiti can still be read calling for "thawra", or "revolution". The slogans are slowly fading with time.