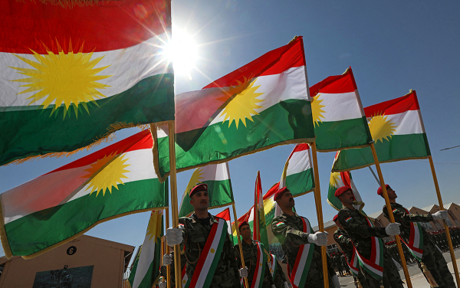 Iran launched a wave of cross-border missile and drone strikes Monday against Kurdish opposition groups based in northern Iraq, where local authorities reported one death and eight wounded.

Tehran previously launched attacks that killed more than a dozen people in Iraq's Kurdistan region in late September, after accusing Kurdish armed groups based there of stoking a wave of unrest that has rocked the Islamic republic.

Iran has been hit by almost two months of protests since the death of Kurdish Iranian woman Mahsa Amini, 22, after she was arrested by the country's feared morality police for allegedly breaching the strict dress code for women.

An Iranian military source confirmed that "Iran has carried out attacks with drones and missiles targeting the headquarters of terrorist parties in the northern region of Iraq," said Iran's Fars News Agency, managed by the Islamic Revolutionary Guard Corps.

"One person is dead and eight wounded," said the health ministry in Iraqi Kurdistan.

"Four drone strikes" targeted bases of the Iranian Communist Party and the Iranian Kurdish nationalist group Komala in the Zrgoiz region, said Atta Seqzi, one of the leaders of Komala.

The groups had been "warned of the imminence of the strikes" and evacuated the installations, he said, adding that they had suffered "no death or injury".

The cross-border missile and drone strikes in late September saw Iraq's federal government call in the Iranian ambassador to protest the attacks.

The UN mission in Iraq at the time deplored the attacks, saying "rocket diplomacy is a reckless act with devastating consequences".

Iraqi Kurdistan hosts several Iranian Kurdish opposition groups which have in the past waged an armed insurrection against Tehran.

In recent years their activities have declined, but the wave of protests in Iran triggered by Amini's death have again stoked tensions between Tehran and Kurdish opposition groups.

The protests in Iran quickly moved beyond Kurdish areas into a broad nationwide movement that continues to rock the Islamic republic.

Demonstrators have continued to take to the streets despite a crackdown by the authorities that has killed 326 people, according to Iran Human Rights, an organisation based in Oslo.