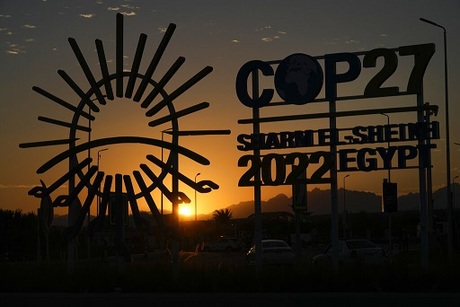 A senior Egyptian diplomat has dismissed as "ludicrous" Monday reports that his country's police have been conducting surveillance of participants at this year's U.N. climate talks in Sharm el-Sheikh.

The United Nations said Sunday that it was investigating allegations of misconduct by Egyptian police officers who were part of the force providing security to the global body at the venue. Germany had raised concerns after attendees at events hosted by the country were photographed and filmed.

But Wael Aboulmagd, a veteran diplomat who heads the Egyptian delegation, said he had not received any direct complaints from Germany.

"I've seen reports in the media," he told reporters. "They're rather vague, imprecise, inaccurate."

Germany's Foreign Ministry said Saturday that it was in contact with Egyptian authorities about the incidents at its pavilion.

"It seems ludicrous because that's an open event," Aboulmagd said, referring to a panel last week at the German pavilion at which the sister of a jailed Egyptian pro-democracy activist, Alaa Abdel-Fattah, spoke. "Why would any untoward surveillance exist in an open event?"

He suggested the issue was being raised to divert attention from the substantive topics being discussed at the climate talks.

The United Nations has confirmed that some of the security officers working in the part of the venue designated as United Nations territory come from the host country, Egypt, citing the "scale and complexity of providing security at a large scale event" such as the COP27 climate talks.

It said that U.N. security "has been made aware of allegations of the Code of Conduct violations and is investigating these reports."

Egypt's hosting of the international summit has trained a spotlight on its human rights record.

The government has engaged in a widespread crackdown on dissent in recent years, detaining some 60,000 people, many without trial, according to a 2019 tally by Human Rights Watch.