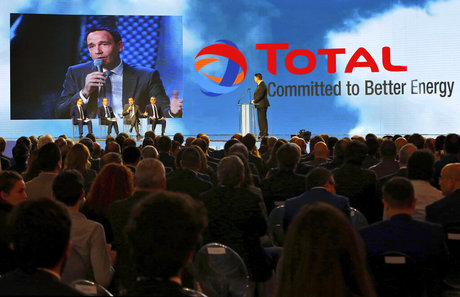 According to a statement, TotalEnergies and its partner, Italy's ENI, signed with Israel a so-called "Framework Agreement" to implement the U.S.-mediated border agreement reached last month. Lebanon and Israel have been formally at war since Israel's creation in 1948.

The border deal envisages that the disputed waters would be divided along a line straddling the "Qana" natural gas field in the Mediterranean. Total said gas production would be based on the Lebanese side, in the so-called Block 9, but Israel would be compensated for gas extracted from its side of the line, under a separately signed deal between Total and Israel.

The company's statement said TotalEnergies would have 60% stake in the operation and ENI the rest.

"TotalEnergies, as the operator of block 9, is proud to be associated with the peaceful definition of a maritime border between Israel and Lebanon," said TotalEnergies CEO Patrick Pouyanné.

"By bringing our expertise in offshore exploration, we will respond to the request of both countries to assess the materiality of hydrocarbon resources and production potential in this area," Pouyanné added.

The exploration was expected to start next year. Cash-strapped Lebanon hopes that future gas discoveries will help the small Mideast nation pull itself out of the worst economic and financial crisis in the country's modern history.

Lebanese officials have said the maritime border agreement does not represent any form of normalization of relations between the two countries.

Lebanon approved licenses in 2017 for an international consortium including Total, ENI and Russia's Novatek to move forward with offshore oil and gas development for two of the 10 blocks in the Mediterranean.

Novatek recently withdrew and Lebanese officials, including Energy Minister Walid Fayad, have said that Qatar is interested in filling that gap.

Lebanon has since reached out to Syria and Cyprus to start direct negotiations over its northern and western maritime border with them as well.

Here's hoping that the explotation finds a great deal of natural gas bringing in a better future for Lebanon.

‏ he is expired though…