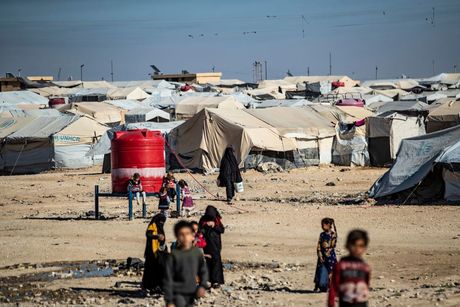 "The bodies of two Egyptian girls were found in the sewage waters" at Al-Hol a day earlier, a Kurdish security source told AFP, requesting anonymity.

The British-based Syrian Observatory for Human Rights, which has a wide network of sources inside Syria, said the girls had been killed with a sharp object, adding that Kurdish security forces had transferred their bodies to a hospital for investigation.

The overcrowded camp in northeast Syria is home to more than 50,000 people, including relatives of suspected jihadists, as well as displaced Syrians, and Iraqi refugees.

It is the largest camp for displaced people who fled after Kurdish forces, backed by a U.S.-led coalition, dislodged Islamic State group fighters from the last scraps of their Syrian territory in 2019.

The International Rescue Committee (IRC) said it was "horrified" at the girls' killing.

"This latest incident involving the deaths of children in the camp highlights the urgent need for longer-term solutions for children in Al-Hol," said Tanya Evans, IRC's country director in Syria.

Earlier this month, Doctors Without Borders (MSF) compared the fate of the thousands of children living in Al-Hol to being in "a giant open air prison."

Children make up 64 percent of the camp's residents and half are younger than 12, according to MSF.

Kurdish authorities have repeatedly called on foreign countries to repatriate their citizens from Syria's crowded camps.

But most have done so only sporadically, fearing security threats and a domestic political backlash.