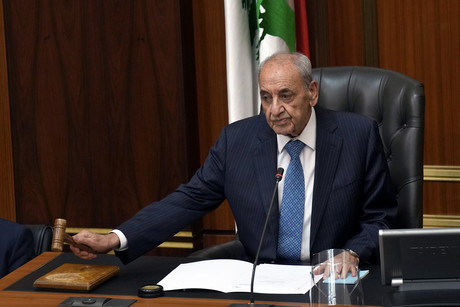 "It's a complete deadlock," change lawmaker Mark Daou told AFP, after parliament failed Thursday to elect a president for the sixth time. "We will not have a president before next year."

Lawmaker Michel Mouawad, who is seen as close to the United States, won the support of 43 of parliament's 128 MPs. But his tally was outnumbered by the 45 blank ballots cast by pro-Hezbollah lawmakers and fell well short of the margin needed for victory.

Mouawad said some change MPs will vote for him in the future, naming lawmakers Mark Daou and Najat Saliba.

In each of the six sessions convened to elect a new president so far, the pro-Hezbollah bloc has walked out before lawmakers could hold a second round of voting which would have reduced the number of ballots needed for victory from 86 to 65.

Lawmaker Ali Hassan Khalil of the Hezbollah-allied Amal movement said the bloc had adopted the tactic because it was "impossible to elect a president without a consensus among lawmakers".

MPs quarreled Thursday over the two-third quorum that some considered as unnecessary in the second round of voting.

"Ask you father about it," Speaker Nabih Berri told Kateb party leader Sami Gemayel who was objecting to the two-third quorum, while Amal MP Qabalan Qabalan said that in 1982, MPs were brought to Parliament in armored military vehicles to secure quorum for Bashir Gemayel's election, which infuriated his son MP Nadim Gemayel.

Mouawad's candidacy is opposed by Hezbollah, whose leader Sayyed Hassan Nasrallah called last week for a president ready to stand up to the United States.

There have been delays in electing previous Lebanese presidents.

Aoun's own election in 2016 followed a more than two-year vacancy at the presidential palace as lawmakers made 45 failed attempts before reaching a consensus on his candidacy.

But this year's vacancy comes as Lebanon is mired in an economic crisis that the World Bank has dubbed one of the worst in recent history.

The country has also had only a caretaker government since May despite calls from international creditors for sweeping reforms to clear the way for the release of billions of dollars in emergency loans.