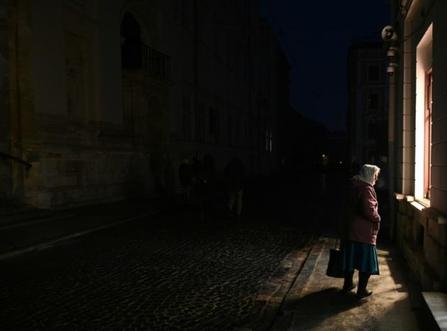 Ukraine struggled Thursday to repair its battered power and water services after Russia targeted the electricity grid with dozens of cruise missiles and temperatures plunged.

The Ukrainian energy system is on the brink of collapse and millions have been subjected to emergency blackouts for weeks due to systematic Russian bombardments of the grid.

The World Health Organization has warned of "life-threatening" consequences and estimated that millions could leave their homes as a result.

Mayor Vitali Klitschko said more than two-thirds of the capital was still cut off on Thursday despite municipal workers in Kyiv restoring some water service overnight.

"Seventy percent of the capital remains without electricity," Klitschko said. "Energy companies are making every effort to return it as soon as possible," he added.

Ukraine's military accused Russian forces of firing around 70 cruise missiles at targets across the country on Wednesday and of deploying attack drones.

Moscow's targeting of Ukrainian power facilities is their latest strategy hoping to force capitulation after nine months of war that has seen Russian forces fail in most of their stated territorial objectives.

"So many victims, so many houses ruined," 52-year-old Iryna Shyrokova told AFP in Vyshgorod on the outskirts of Kyiv after the Russian strikes.

"People have nowhere to live, nowhere to sleep. It's cold. I can't explain it. What for? We are also human beings," she said, calling it "the scariest day."

Ukraine's energy ministry said that all three nuclear facilities had been reconnected by Thursday morning.

The head of the central region of Poltava, Dmytro Lunin, said authorities were "working around the clock to restore power."

"In the coming hours, we will start supplying energy to critical infrastructure and then to the majority of households," Lunin said.

"The energy supply situation is complicated. So shutdowns will continue in the region to reduce the pressure on the grid as much as possible," Reznichenko warned.

Repair work was ongoing elsewhere, including in the Rivne, Cherkasy, Kirovograd and Zhytomyr regions, officials said.

Moscow announced separately it had issued tens of thousands of Russian passports to residents of four Ukrainian territories, which President Vladimir Putin claimed to have annexed in September.

"More than 80,000 people received passports as citizens of the Russian Federation," Valentina Kazakova, a migration official with the interior ministry, said in remarks carried by Russian news agencies.

In September, Russia held so called referendums in Donetsk, Lugansk, Zaporizhzhia and Kherson and claimed residents had voted in favor of becoming subjects of Russia.

Putin formally annexed the territories at a ceremony in the Kremlin later that month, even though his forces have never had full control over them.