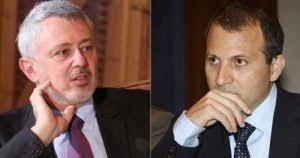 During his latest visit to Paris, Free Patriotic Movement chief Jebran Bassil tried to convince the French with endorsing a number of presidential candidates, a media report said on Thursday.

“He raised the names with them seeking ‘a bargain and an exchange of services,’ an approach that the French side did not welcome,” highly informed sources told the Nidaa al-Watan newspaper.

The sources revealed that the names were Jihad Azour, Ziad Baroud and George Khoury and that Bassil pledged to provide for any of them a Christian cover, “something that (Marada Movement chief Suleiman) Franjieh lacks in light of the Christian blocs’ rejection of his election.”

Franjieh for his part is seeking to “promote himself with the French” and had recently dispatched an envoy to Paris to try to sway the French into endorsing him for the presidential settlement that they are working on, the newspaper quoted “credible” sources as saying.

Franjieh is also “continuing to activate his channels of communication with the Russian leadership, which have stayed open since his latest visit to Moscow,” the sources added.

“He had heard forthright Russian support for his nomination and a promise that Russian diplomacy would do all it can to push for boosting his presidential chances with the allied and friendly countries,” the sources said.