Qassem stresses that not only Hezbollah is responsible for president election 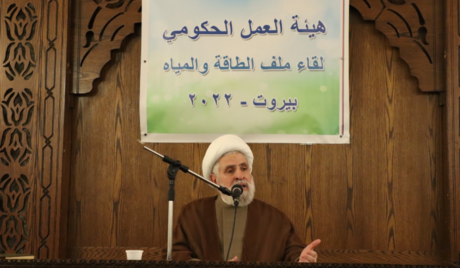 Hezbollah deputy chief Sheikh Naim Qassem on Friday emphasized that the election of a new president for the country is not solely the responsibility of Hezbollah.

“We have a specific number of MPs in parliament and we can influence the president’s election based on this number and each of the other blocs can influence it based on its size,” Hezbollah number two added.

“If the resistance is a point of contention, refer it to dialogue, and let’s bring a president who has the ability for economic rescue with the participation of all Lebanese,” Qassem went on to say.

He also said that the new president should have the ability to “oversee a dialogue table that can bring the Lebanese together to discuss the issue of the defense strategy.”

“Seeing as we agree on the priority of the economy and combating corruption, let’s refer the controversial issues to dialogue,” Qassem added.

Qassem's words are jumbled
Proper order: Qassem stresses that only Hezbollah is responsible for no president election.

Are you saying the Hezbolla MPs president is WHITE paper? in other word you do not want a president but rather a robot.

As these three comments illustrate, Hezbullah probably does not want a democracy in Lebanon because then its Shia majority would make Hezbullah the government, which would give NATO and Israel the excuse to bomb Lebanon into dust. As things are now, Constitutional Article 24, which gives half the parliamentary seats to Christians, keeps Lebanon in the hands of NATO/Israel, dysfunctional, and "safe". I guess I agree with Hezbullah's analysis. KSA/MBS and al Thani in Qatar won't be here forever.

Does it really matter who the Shias want, it's what Iran wats? Iraq where, unlike in Lebanon, Shias are really the majority, Shia Muqtada al-Sadr's block got the largest number of seats in parliament but Iran's militias wouldn't let him form the government.