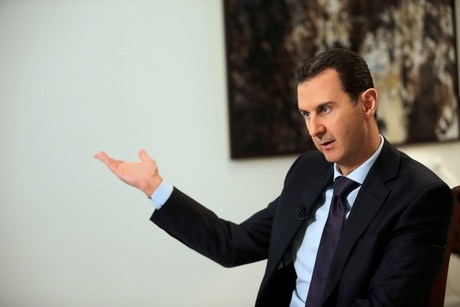 Syrian President Bashar al-Assad has pledged that Damascus will continue to back Lebanon’s Iran-backed Hezbollah.

“We have supported Hezbollah, we are still supporting it and we will continue to support it, because it is a strategic ally for us,” Assad repotedly said in an interview with a number of journalists.

Moreover, Assad voiced conern over Lebanon and its future amid the current situation, describing the neighboring country as “Syria’s main flank.”

“Stability in it is very important for Syria,” Assad added.

Hezbollah has sent thousands of fighters to bolster Assad’s forces in the face of the revolt that erupted in 2011.

“We will continue our support for the resistance forces in the region, Lebanon and Palestine,” Khamenei added.

God bless Bashar al-Assad, President of Lebanon and Syria, for supporting our Shia resistance aka Hezbollah. This president has done a lot of good for his people, fought and defeated terrorism, and propelled both Syria and its small neighbor into the realm of developed and prosperous nations.

President Assad supports our Shia resistance total domination of Lebanon and encourages it. We in Lebanon are and will remain Syria's flank as long as there is a lion like Assad and his family ruling Syria.

Not in Lebanon you don't

"We will Liberate" Exactly what?

My enemy's enemy is still my enemy.

What a stupid thing to say. Assad is a murderer who massacred his people, with the active help of Hezbollah and Iranian thugs. Lebanon has been thrown into the abyss thanks to this so-called phoney "resistance" which is nothing else than a corrupt fanatical anti-Arab militia totally controlled by a bloody murderous Iranian regime currently facing an unprecedented revolt by its people who have had enough of this repressive regime.

If this statement and action by Assad is not a blatant Syrian interference in the internal affairs of the Republic of Lebanon, then please tell us what is.