'It's not over': Iranian Kurds in Iraq in Tehran's crosshairs 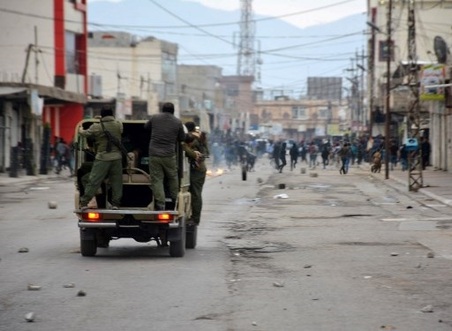 The roof is caved in, a wall has exploded and broken glass litters the floor at a base of the exiled Kurdish-Iranian opposition in mountainous northern Iraq.

"These are the regime's missiles," said Karim Farkhapour, a leader of the Democratic Party of Iranian Kurdistan (PDKI), with a revolver strapped to his traditional belt.

"The Iranian regime has bombed us three times in less than two months."

The Islamic Republic of Iran has been torn by over two months of protests sparked by the death in custody of Kurdish-Iranian woman Mahsa Amini, 22.

As Iranians have vented their anger at the regime, Tehran has blamed outside forces, and exiled Kurdish groups on whose bases it has rained down missiles and so-called suicide drones.

The PDKI's headquarters, dubbed "the Castle", near the town of Koysinjaq, or Koya in Kurdish, looks like a desert mountain fort straight out of an adventure novel.

The movement settled there in 1993 during the era of former dictator Saddam Hussein, who was toppled in the 2003 U.S.-led invasion and executed three years later.

Twelve PDKI members were killed and 20 wounded in the latest attacks on the site, said Farkhapour.

PDKI members have evacuated the fort, which remains heavily damaged, with cables dangling from the library roof and books scattered on the floor.

In another room, Farkhapour stepped gingerly through the rubble to reach a Kurdish flag that remained unscathed.

"The Tehran regime is going to target us again," he predicted grimly. "It's not over, you'll see."

It was not the first time Iran's Islamic Revolutionary Guard Corps has launched strikes against the PDKI or other groups in Iraqi Kurdistan.

The Iranian government labels these factions "terrorists" accusing them of fueling the civil unrest since the September 16 death of Amini, who had been arrested for allegedly breaching Iran's strict dress code for women.

Iran has accused the groups of importing weapons from Iraq across the porous border long used by smuggling networks.

"False", retorted Moustafa Mouloudi, another of the leaders of the PDKI in Koysinjaq.

"There is absolutely no evidence that we have smuggled weapons from Iraq to Iran," he said. "It's a lie that the regime has made up to hide the truth from the people. The regime is the terrorist."

Iranian Kurdish groups such as the PDKI and Komala have long been in Tehran's sights.

Based in Iraqi Kurdistan since the 1980s with the blessing of Saddam, who was then at war with Iran, many follow a socialist doctrine.

"We are a secular party and we fight for women's rights," said Farkhapour.

Although analysts believe they have largely refrained from armed activities in recent years, they continue to actively campaign from exile.

The PDKI denounces the discrimination suffered by Iran's Kurdish minority, who make up some 10 million out of the country's 83 million people.

The group has demanded a fully democratic and federal Iran in which Kurdish provinces would have considerable autonomy.

The group is tightly organised in a rigid hierarchy and demanded that AFP reporters stick closely to an official program for the visit.

Within the PDKI, "we are free", said Shaunem Hamzi, a 36-year-old activist who lives in Koysinjaq with her parents.

Before the latest attacks, she lived in a PDKI camp about 500 meters (just over 500 yards) from the citadel where some 200 families resided in single-storey cinderblock or concrete houses.

However, the latest attacks, she said, "have been much stronger than the previous ones. The children, the families were very scared. The fear of getting killed is among us now."

Like the other inhabitants, Hamzi had to leave the camp and now frequently switches sleeping places.

As an Iranian Kurdish woman, she strongly identifies with the protest movement rocking Iran.

"If the regime even temporarily makes us stop, the protest will surface again, because it is in our hearts," she said passionately.

"The protesters will never obey the regime's rules."

AFP regrets that Iraq was not available for comment.