Who are the Iranian-Kurdish rebels in northern Iraq? 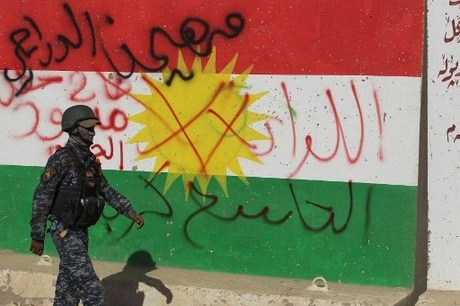 Iranian-Kurdish rebel groups have for decades sought refuge in northern Iraq's autonomous Kurdistan region, but they have recently come under fresh fire amid weeks of protests in the neighboring Islamic republic.

In the wake of demonstrations sparked by the September 16 death in custody of Mahsa Amini -- an Iranian woman of Kurdish origin -- Iran's Islamic Revolutionary Guard Corps has launched missile and drone strikes on the bases of Kurdish groups in northern Iraq.

At least 17 people have been killed in these strikes since September, according to an AFP tally based on reported tolls.

After previously waging an insurgency against the clerical state in Iran, the groups have largely abandoned combat activities in recent years to focus on political campaigning for long-sought rights for Kurds.

Since the 1980s, Iranian Kurdish factions have made a home for themselves in Iraqi Kurdistan -- often with the blessing of former dictator Saddam Hussein.

Tehran classes these groups as "terrorist" and "separatist" organisations, accusing them of launching attacks on Iranian forces.

But after decades of armed insurrection, they have heavily scaled back any military activity, while continuing to train fighters at bases in Iraqi Kurdistan's mountainous regions.

The oldest is the Democratic Party of Iranian Kurdistan (PDKI), which has repeatedly denied using Iraqi territory to launch attacks on Iran.

Rather, it says its political leadership is headquartered in Iraq's Kurdistan region. The party "fights to realise the national rights of Kurds through a federal and democratic Iran", according to its website.

The second-largest is the Komala Party of Iranian Kurdistan, founded in 1969 by intellectuals and students in Tehran and Kurdish cities in Iran.

Another target of the cross-border strikes is the Kurdistan Freedom Party (PAK), whose fighters were among the forces that helped drive out the Islamic State group from its former strongholds in Iraq.

Also based in Iraq is the Kurdistan Free Life Party (PJAK), affiliated with the Kurdistan Workers Party (PKK). The PKK has waged an insurgency in Turkey and is considered a terrorist group by Ankara and its allies.

Despite a fragile ceasefire in 2011, sporadic clashes have pitted the Kurdish rebels against Iranian forces.

The groups have supported demonstrations that broke out in Iran following the death of Mahsa Amini, after her arrest by the morality police for allegedly violating the Islamic republic's strict dress code for women.

Much of the activism has shifted to social media, where the Iranian-Kurdish factions in Iraq have been vocal in their support of the protests, sharing videos and relaying calls for general strikes.

Before the demonstrations kicked off, there were frequent border crossings, says Adel Bakawan, director of the French Research Center on Iraq (CFRI).

When these factions "wanted to carry out military action", they would send smaller units across the border to Iran, he added.

Today, the "PDKI and Komala are doing everything to avoid militarizing the protests", as Tehran could use this to "justify" an even harsher crackdown, he said.

The groups have long denounced discrimination faced by Iran's Kurdish minority -- about 10 million of the 83-million-strong population -- who adhere to Sunni Islam rather than the Shiite branch prevalent in the country.

Iranian Kurds complain of a lack of local political representation and an absence of economic development in the country's Kurdish regions. Authorities have also banned them from teaching their language in schools.

Iranian officials, who describe the recent protests as "riots", have accused Kurdish rebel groups of participating in the unrest and of crossing into Iran to stage attacks.

"Iran is looking for a scapegoat," said analyst Fabrice Balanche. "The Iranians want to portray the protesters as being manipulated by external forces."

Since the 1990s, an agreement between northern Iraq's Kurdish authorities and the rebel groups has guaranteed their right to reside in the autonomous region -- provided they refrain from any combat activity to avoid compromising ties with Tehran.

Kurds in Iran and Iraq speak the same Sorani dialect, and many families straddle both sides of the border.

Even veteran Kurdish politician Massud Barzani, considered a founding figure of the autonomous Kurdistan region in Iraq, was born in the short-lived Republic of Mahabad, an unrecognised Kurdish statelet which sprung up with Soviet support in 1946.

It existed for less than a year before Iran reasserted control.

"...an agreement between northern Iraq's Kurdish authorities and the rebel groups..."
AFP regrets that Iraq was not available for comment.