Op-Ed: Sexual violence in conflict is a global problem that requires a global response 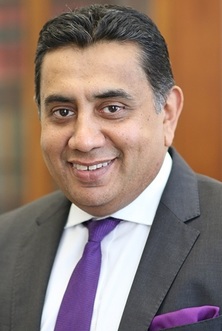 Below is an op-ed by Lord Tariq Ahmad, the British PM's Special Envoy for Preventing Sexual Violence and Minister for the Middle East and North Africa:

“In the cruelty of war, it is not just bullets and bombs that cause lasting damage. Sexual violence is tragically an all-too-common consequence as well.

Right now - in Ukraine, in Tigray, in the Democratic Republic of Congo – to name but three conflict areas; civilians, mostly women and girls, are sickeningly facing rape and sexual abuse in active conflict zones.

The aggressors usually walk away from their crimes, knowing they’re extremely unlikely to be held to account and punished.

Such abhorrent abuses must stop.

That is why the UK government is at the vanguard of global action to prevent and prosecute conflict-related sexual violence – and why from today (Monday, November 28) we will be bringing together partners from around the world in London to discuss how we can take more action to tackle this global evil.

This week’s conference has been a decade in the making.

Ten years ago, former Foreign Secretary Lord William Hague and Angelina Jolie launched the Preventing Sexual Violence in Conflict Initiative (PSVI), an initiative I have been honoured to lead for the last five years.

Since then, the UK has supported provided £50m over the last ten years to nearly 100 projects across more than 29 countries, helping thousands of survivors to rebuild their lives.

It has not been easy, as we know from shocking first-hand testimonies that this terrible crime can affect some of the most vulnerable people in some of the most inaccessible places around the world. We also know that sexual violence is far from an inevitable consequence of war. There is a lot we can do, both to help survivors and to prevent others from going through a similar ordeal.

I saw this myself on a recent visit to the Democratic Republic of Congo, with Her Royal Highness the Countess of Wessex. An astonishing 22% of women and 10% of men in the entire province of North Kivu have been subjected to sexual violence during the ongoing conflict.

I will simply never forget hearing the harrowing screams of an innocent four-year-old girl, a victim of rape – the youngest patient in the hospital at that time. How can men do this? What evil possesses them? Through the incredible work of Nobel Peace Prize winner Dr Denis Mukwege and the Panzi Foundation, who I am honoured to call a friend. Survivors are given compassionate care, including medical, psychosocial, economic and legal support to help them heal and rebuild their lives.

With our partners and allies, we are also involved in many other successful initiatives around the world.

For example, we champion the rights of survivors, by directly supporting the Global Survivors Fund; the Murad code and the Declaration of humanity.

In Ukraine, we are involved in a series of new projects, including the provision of safe spaces for women and girls, and we are sending UK experts to train prosecutors and police in handling cases of conflict-related sexual violence.

Elsewhere, in Bosnia’s Brcko region, we helped support legislative changes that recognise children born of wartime rape as civilian victims – providing these children with important legal protection. We are now building a global coalition of countries to protect other children in this situation.

In Iraq we’ve helped to fund an online portal for applicants seeking reparations because of sexual violence against the Yazidi community.

In the last 10 years, we have all come a long way – but we know that much more must be done, both to help survivors and to prevent others from suffering such violence. Rape, torture, sexual violence is real, it is happening today. It is a shocking reality of our world in 2022.

At the conference we will be able to share details of the lessons learned in tackling this global scourge in the last decade, and critically discuss the actions we must take next.

Our aim is to make a long-lasting, tangible change in the lives of survivors, while preventing others from going through similar horrific ordeals in the future.

This is a global problem that requires a global response. We owe it to the courageous survivors who are an inspiration to us all.

For more information about the conference and the Preventing Sexual Violence Initiative, please follow me on twitter @tariqahmadbt”