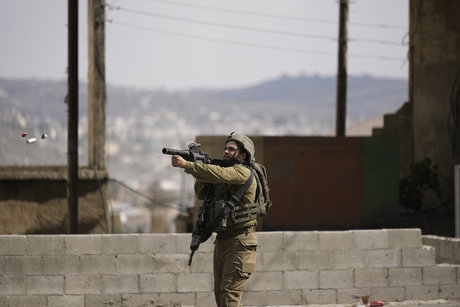 Three Palestinians were killed by Israeli troops in the West Bank Tuesday, the Palestinian health ministry said, the latest deaths in a sharp uptick in violence in the occupied territory.

Two brothers were killed by Israeli fire in Kafr Ein, near Ramallah, while a third man died of bullet wounds to the head fired by Israeli troops in Beit Ummar, near the flashpoint city of Hebron, the ministry said.

Commenting on the Beit Ummar clash, the Israeli army said it had opened fire on "rioters" who "hurled rocks and improvised explosive devices at the soldiers" after two vehicles got stuck during an "operation patrol" in the area.

The Palestinian ministry said a man it did not identify had died "after being shot in the head."

There was no immediate comment from the Israeli army.

Hamas, the Islamist movement which runs Gaza, said the Israeli "escalation" would be "confronted by escalating resistance" from Palestinians.

Violence has flared this year in the West Bank, where the Israeli army has launched near-daily raids across the territory.

This week the army announced it had made more than 3,000 arrests this year as part of Operation Break the Wave, a campaign it launched following a series of deadly attacks against Israeli civilians.

The United Nations says more than 125 Palestinians have been killed across the West Bank this year. Israel has occupied the territory since the Six-Day War of 1967.